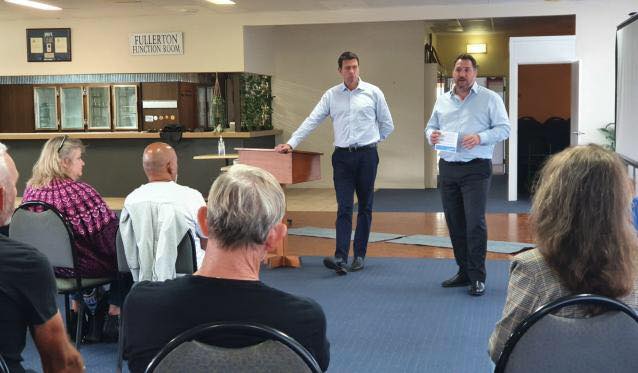 Cracking down on Crime and Hooning in Glass House electorate

“Sadly, residents are telling me crime has become a genuine concern in our communities.  This is new!  It’s only in the past couple of years we’ve seen the local crime rates skyrocket,” said Mr Powell.

The number of offences committed annually in Queensland increased 19% since the election of the Palaszczuk Labor Government in 2015.

Statewide offences peaked in 2019 with over 1.5 million offences recorded in Queensland. *

“I’ve spent the last month travelling around the state attending crime forums and one of the recurring issues I keep hearing, including here in Glass House, is that people are feeling increasingly scared in their own homes.  And that’s just not good enough” said Mr Purdie.

“Some of the specific issues we addressed at the forums were domestic violence, police response times, hooning, youth crime and illegal activities in our National Parks,” said Mr Powell.

“The attendees were also interested in what the LNP will do differently to combat this crime epidemic.”

The LNP will put the brakes on Queensland’s hooning problem with new cameras, new laws and new technology which will literally shred the tyres of dangerous drivers.

The plan includes: rolling out 100 new covert CCTV cameras in hooning hotspots with a direct feed to police stations and officers; laying tyre-shredding road surfaces in known burnout hotspots which will quickly erode rubber when a car performs a burn-out or skids (but which causes no damage when vehicles are driven appropriately); and new anti-hooning gang laws which will impose an additional three year driving ban on hoons whose cars are impounded, immobilised or confiscated, rising to five years for repeat offenders.

The LNP will also crack down on youth crime by: introducing tougher laws which remove the principle of detention as a last resort; 24/7 monitoring of youth offenders on bail or other court orders; mandatory detention for third conviction;, establishing a community payback farm program; scrapping youth bail houses; and, financing justice reinvestment which has proven to be successful in early intervention and reducing offending.

“These are policies which we’ve created as a direct result of community consultations in areas with high crime rates such as Caboolture” explained Mr Purdie.

“It was great to be able to share these policies with Glasshouse and Caboolture locals, but I also owe you an apology,” said Mr Powell.

“Unfortunately, Australia Post did not deliver my mailed invites for the forum in time for many of you to be aware that the events were even being held. They were lodged correctly to be delivered in the week of the 24th – 28th August and I was extremely disappointed to learn that most of the invites were not delivered until the day of the forum - far too little notice for many people,” concluded Mr Powell.

If you missed the forum and had any specific questions for Andrew Powell or Dan Purdie or are wanting copies of the LNP crime policies, please send an email to glass.house@parliament.qld.gov.au