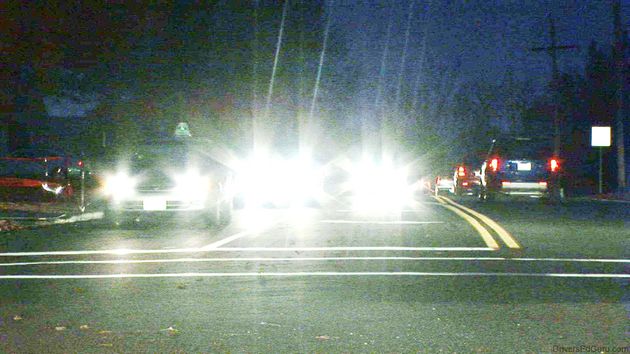 It is part of the conversation, blinding car headlights are a 'constant' source of frustration for drivers

If you have driven on the roads lately and found yourself struggling to see or needing to flip your rear-view mirror because of the glare from bright headlights, you're not alone.

These days if there is a conversation about headlights its usually about 4WD vehicles or souped up cars retro fitted and overwhelmingly, people said headlights are too bright.

More people who are pedestrians and bike riders are avoiding traveling at night due to the unprecedented number of vehicles with bright lights on even when there is adequate to better then adequate street  lighting on main roads.

The trend has been observed of traffic users trying to out do each other by the "who has the brightest lights" as a kind of competition, some resorting to install extra lights exceeding 4 lots while the rare few are installing bright lights on the rear of vehicles.

It is noteworthy that side on of cars these bright lights,  in some cases are also just as bright from the side on position,  further affecting pedestrians and home owners of stray light nuisance.

Some drivers have been questioned about bright lights those that have them some report they automatically come on and the driver is unaware of how to switch them off while other report there is definitely no way of switching them off altogether unless you switch off the engine.

To a lesser extent mobility scooters also have offending LED lights installed which are often very bright while useful driving at night, these lights are not pointed down and are hazardous to on coming pedestrians and bike riders and are a lot more nuisance in supermarkets where drivers of these vehicles have claimed they are unable to switch them off despite the bright lights are a nuisance to other pedestrians.

All of which add to the conversation on this issue, something which is unlikely to be resolved anytime soon.

Queensland's peak motoring body, the Royal Automobile Club of Queensland (RACQ), said it had not seen an increase in complaints but said it was apparent it was an issue of "constant concern" to drivers.

We haven't seen an increase from month-to-month or year-to-year that I'm aware of, but it is a constant area of concern, according to  RACQ's Head of Technical and Safety Policy.

Increasingly car manufacturers are making vehicles with LED or High Intensity Discharge (HID) lights which come across as brighter and often have a blue tint to them.

Not only do these lights provide better illumination than halogen lights, LEDs claim to consume less energy which translates into fuel savings and emissions reductions.

But the RACQ says HIDs and LEDs are typically the source of frustration for fellow road users.

Newer vehicles with, particularly the HID headlamps, they are the ones that seem to be of most concern,

There's always general concern about being dazzled by lights and often it's about people using auxiliary or driving lights as well.

The Australian Design Rules (ADR), the national standards for vehicle safety, set out guidelines which dictate the size and shape of a car's headlight beam as well as the amount of permissible glare.

Oftentimes it is the aim or position of the lights, not their wattage, which causes the glare — which is one reason why there is no maximum wattage specified in legislation.

What the ADR does require is cars equipped with HIDs to also have a self-levelling mechanism to ensure the headlights are always aimed at the ground.

It also requires the vehicle to be fitted with a headlight washer to minimise the build up of dirt and grime, which can affect how the light is dispersed.

Oscar Oviedo-Trespalacios, from the Centre for Accident Research and Road Safety Queensland, said the rules struggle to keep up with the pace of technology.

All the vehicle standards are part of the Federal Government [legislation] so in Australia we don't allow vehicles that don't fit a particular standard,

However there is some flexibility because we know there is new technology and we know the legislation to not necessarily change as quickly as we want.

What to do when approaching vehicles with bright headlights

Don't look directly at the headlights of an approaching vehicle — look to the left hand side of the road and make sure you also drive as near as possible to the left.

Slow down and, if necessary, pull over at a safe location as soon as possible and wait until your vision returns to normal.

Keep your vehicle's windscreen clean inside and outside, as it'll be easier to see at night.

If you find it harder to see at night, get your eyes checked as difficulty with driving at night or in poor weather conditions is often one of the first signs that your vision isn't as good as it should be.

Sometimes it is not that practical or easy as a driver to do any of the above, in which case avoid driving

There was little evidence to support the notion that headlights are too bright, but conceded it appeared to be an emerging issue among drivers.

It is very interesting and certainly something open to research but we do know some people do experience longer periods of blindness due to the change of lights on the road,

Another issue of concern is lights that are retrofitted, or modified, which in some cases are "not necessarily legal".

We need to be very careful with what kind of technology we are including and certainly that is a concern of the government and they work very heavily to prevent these kinds of situations,

We don't have a very clear understanding of the risk because it is new technology.

The penalties for drivers using lights on a vehicle that dazzle other road users vary from state to state, but in Queensland drivers can cop a $52 fine while in Western Australia drivers are fined $100 and lose 1 demerit point.