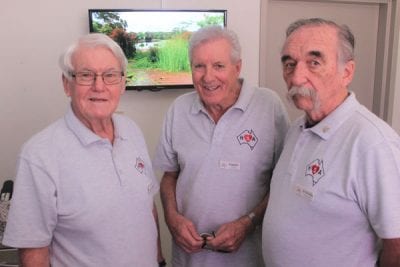 Patients undergoing dialysis at Caboolture Hospital will be able to watch their favourite TV shows, after the donation of two new digital televisions by the Heart Support Australia (HSA) Caboolture Branch.

The TVs have been installed in the Jasper Suite, which is fitted with self-care chairs for independent dialysis for patients who would usually dialyse at home but who are unable to do so for a variety of reasons.

A regular treatment can take up to six hours. At present, two patients utilise the facility three days per week with others using it often as well.

Heart Support Australia (HSA) Caboolture Branch President Gilbert Nielson said some cardiac patients were also on dialysis, which meant several hours in a chair with little to do over a lengthy period.

“We hope our donation will help pass the time and stem the boredom for patients who are often spending several hours sitting in a chair during treatment,” Mr Nielson said.

Caboolture Hospital Executive Director Dr Lance Le Ray said the donation was a great example of people coming together to improve the health of the Caboolture community.

“I would like to thank the HSA Caboolture and District Branch for donating these televisions and its strong support of the hospital and patients over many years,” Dr Le Ray said.

“Our dedicated group of volunteers combined with generous donations from the community really help make a visit to hospital more comfortable for our patients, their families and visitors.”

HSA is a local support group for heart sufferers to communicate with members who have experienced similar ailments. Support for carers and family members is also provided.