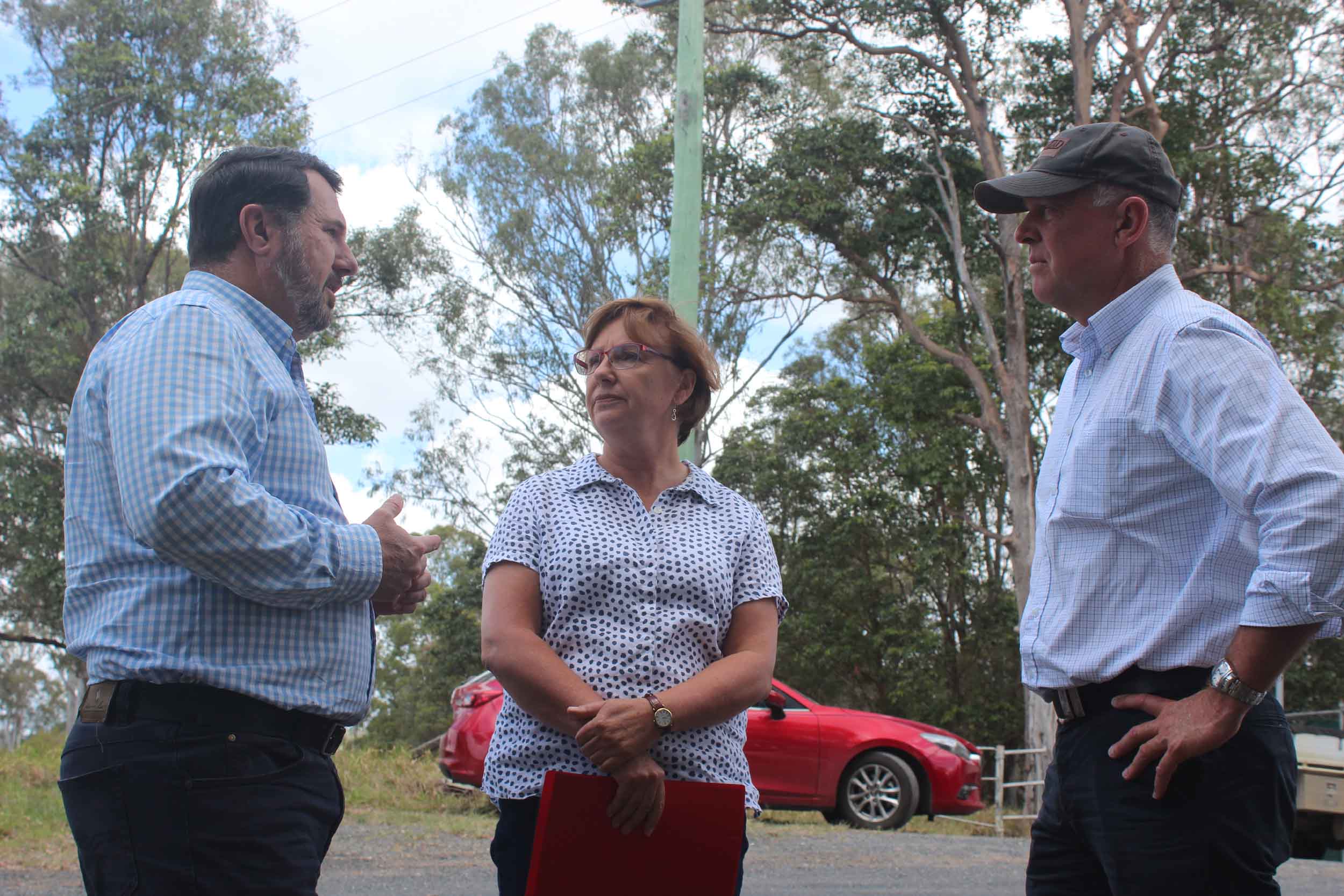 The LNP is demanding the Palaszczuk Labor Government release its report on the impact of invasive weeds – three years after the inquiry was launched.

Member for Glass House, Andrew Powell MP, has received so many complaints about noxious weeds from across the electorate that he recently invited Shadow Minister for Agriculture Tony Perrett on a ‘weeds tour’.

Mr Powell and Mr Perrett have urged the Government to stop burying the report and come clean on its failure to manage invasive weeds.

“Every rural Queenslander knows this problem is out of control, so the Government should stop the cover-up and release the report,” urged Mr Powell.

“After three years, we need to see the facts.  This Government’s culture of secrecy is causing headaches for farmers and residents alike,” stated Mr Perrett.

Mr Powell and Mr Perrett met with Ms Ellen Adriaansen, a member of the Woodford Lions and a driving force behind the “Weed Free Woodford” initiative on site at Delaneys Creek.

“Council struggles to do anything about the weeds unless you complain.  And who wants to complain about your neighbour?” stated Ms Adriaansen.

“It isn’t really their fault, the current state legislation around weeds lacks both the incentives and penalties to encourage good weed management,” Ms Adriaansen continued.

“Ellen is right.  Parts of the current weed laws are not being enforced and some are simply too soft – they aren’t stopping the spread of these weeds that impact on the profitability and productivity of our rural lands,” agreed Mr Perrett.

The weeds are also impacting on our National Parks and tourism across popular drive destinations like the D’Aguilar and Blackall Ranges.

“Chinese Elm spreads quickly and grows in to a large, deciduous tree 10 to 30 metres tall.  It’s invasive, unsightly and destructive to our natural environment.  Any suggestion it has become “naturalized” in to our native landscape is an appalling failure,” stated Mrs Kalle.

“We need to get tough on these weeds!” she continued.

“It’s great to see the community so active in weed removal, but ultimately it’s not just their job.  Managing noxious weeds is an important part of the Minister for Agriculture’s portfolio, one which he is unfortunately forsaking,” said Mr Perrett.

The inquiry into noxious weeds was instigated in November 2016 and public hearings began in April 2017.

Mr Perrett wrote to the Labor chair of the State Development, Natural Resources and Agricultural Development Committee in March this year to request the finalisation of the inquiry and in April the chair replied he ‘would soon be able to organise a release date’. It is now seven months later, and a date is yet to be set.

“Invasive weeds may not be a problem in his densely populated urban electorate, but out in regional areas they are damaging agriculture and tourism – our most important industries – not to mention the broader environment,” said Mr Perrett.

“I know the Government has a poor work ethic, but surely even they can complete and release this report in three years.  We need the report so we can start making the legislative changes needed.  We need to start winning this war on weeds,” concluded Mr Powell.