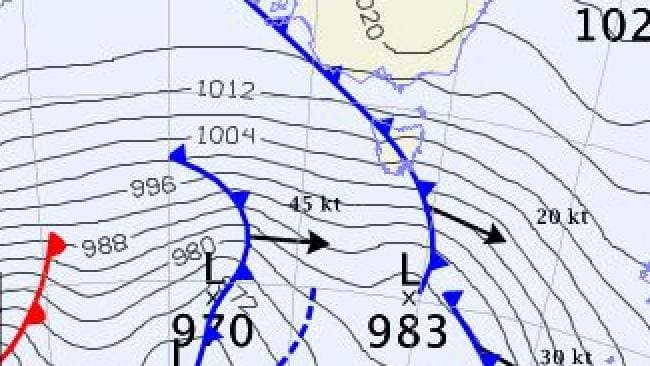 What is a cold front and why does it do so much damage?. Plus what is a warm front?

A front on a weather map may look like benign red and blue lines but they mark the zones where opposing air masses collide.

As southern Australia has been experiencing over the last few days, the fall out can be ferocious.

Philip Perkins, a meteorologist at the Bureau of Meteorology said "when you think of other types of fronts like the Western Front in the war, it separated two things — the Allies and the Axis".

"A cold front is the exact same thing. On one side of it you'll have one type of conditions, certainly much warmer and then behind that is much cooler temperatures."

The opposing forces line up

Our weather is the result of infinite factors at varying scales — from uneven heating from the sun, continents and oceans warming differently and the atmosphere responding accordingly.

But when it comes to fronts in Australia, the most direct cause is usually a low pressure system spinning through from west to east.

As is the case at the moment.

On the right-hand side of the low, the wind is being drawn down from the north of the continent, which is warm and dry.

"But then on the other side of it we've got wind coming from the south.

"And the trick with winds is, winds bring the conditions from where they came."

What is the fall out?

So we end up with cold air being dragged up from Antarctica, colliding with warm air off the continent.

"We'll see a sudden change in wind direction. In Australia that tends to be from the north or northwest which then whips around to anything from the south or southwest.

"Those winds can be quite gusty as well," Mr Perkins said.

Photo: A cold front occurs when a wedge of cold air forces its way under a mass of warm air. (ABC Weather: Kate Doyle)

Think anything from a subtle turn of the weathervane to trees being upended and roofs being ripped off, depending upon the strength of the front.

"You would notice a change in the cloud type and cloud type is important because rainfall depends upon the type of crowd that it comes from."

Not all cold fronts bring rain, sometimes it is just the blustery change in wind direction, which can be incredibly dangerous during the fire season.

But when they do bring rain it tends to be patchy, stormy rain with abrupt downpours.

"If conditions are just right and just cold enough, we can certainly see hail and snow falling, particularly behind the cold front in the coldest air."

Then what's a warm front?

Those paying keen attention to their weather charts over the last few days will have noticed it is not only cold fronts in the mix — a warm front has been lurking about too.

Depicted as red lines with semi-circular bubbles on a synoptic map, Mr Perkins said a warm front was the opposite of a cold front in that a warm air mass moves to replace a cooler air mass.

"So we can see some pretty interesting weather phenomena, good heavy rainfall and some fog, low clouds and very dreary.

"Imagine sort of London type weather, with a warm front."

"We don't tend to see too many of them over mainland Australia too often because Australia doesn't really extend that far south."

Warm fronts are common just that little bit closer to the poles in Canada, Scandinavia and Russia.

"But we do see them impact far south-eastern Australia, certainly Tasmania and offshore territories like Macquarie Island."

Yes. As if two warring airmasses wasn't enough, sometimes the fronts themselves can collide.

Because the cold and warm fronts generally circle off of a low pressure system, the cold front can catch up with the warm front, which is generally ahead.

When they combine it is called an occluded front.

"What that means is that we ended up with cold air and warm air, all meeting at the same place, bringing us lots and lots of rainfall.

"Those sorts of events are occurring over mainland Australia are pretty rare, but they certainly do occur in the south-eastern parts of the country in particular," Mr Perkins said.