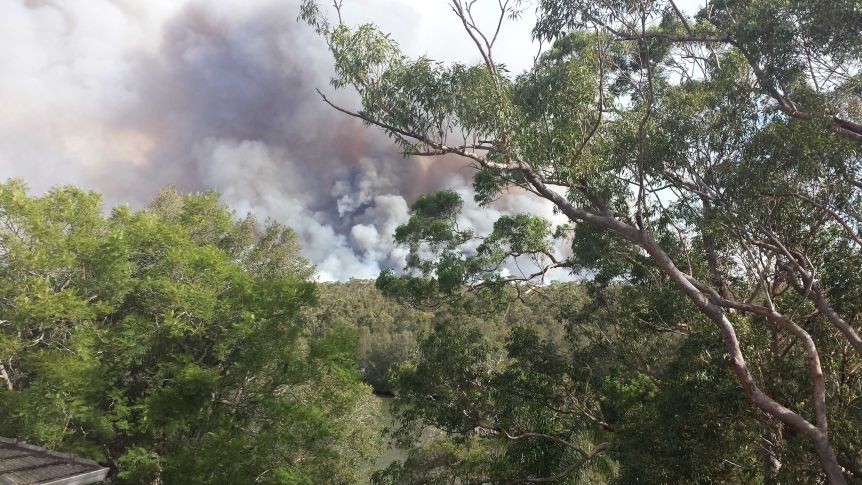 How to prepare yourself to face bushfires — and engage your brain

Danielle Every, who is a psychologist at Central Queensland University, has interviewed many people across Australia with first-hand experience of bushfires.

Her work helps emergency services understand how people prepare for risk, and respond to fires.

"My sense from those interviews is that what's needed for a bushfire plan is more extensive than what people understand is needed by a bushfire plan," Dr Every says.

She found that even though many people had done the basics — had a plan on the fridge, cleared their gutters and packed a box — they found themselves panicking when the fire came.

The higher part of your brain (the pre-frontal cortex) regulates your brain's response to the threat.

"It keeps you in that zone where you can still think quite clearly."

"But when we've got a threat that is really overwhelming, we can actually lose this connection with our prefrontal cortex."

This sends you into fight, flight or freeze mode.

How to cope under extreme stress

Dr Every's research shows that people who are better prepared for disasters:

Dr Every suggests using a strategy known as anticipate, identify and manage or AIM.

"Actually knowing you're probably going to flip out is really, really helpful," she says.

Being able to identify that you are feeling stressed is a cue to use techniques to calm yourself.

"These are simple things like ... deep breathing, having a small object close by that is grounding, or being with someone who is themselves calmer than you are so you've got emotional feedback loops between each other."

To help you develop coping strategies she suggests using the RediPlan guide from the Australian Red Cross. The Australian Psychological Society also has resources that include information about how to emotionally prepare children.

"[Younger kids] really rely on the adult around them to regulate their emotions so as a caregiver you need to [be emotionally prepared] so your kids can feed off that and feel safe."

Dr Every's surveys also show one of the biggest things that underpins being able to cope is being physically prepared.

"Those two things are really intimately connected to each other," Dr Every says. "Doing your high-level preparations really helps you to identify that you're stressed but you've got this."

The problem is many people aren't prepared enough.

Josh Whittaker has gathered the stories of people who have survived fires in Victoria and New South Wales since the Black Saturday fires in 2009.

Dr Whittaker is now gathering experiences of people who were threatened or impacted by the Black Summer fires in New South Wales for the NSW Rural Fire Service to improve bushfire preparedness, education and warnings.

"One of the questions we often get is "Why don't people prepare?" "Why aren't they as prepared as they should be?" he says.

A major challenge is that many people in urban areas like where Anna lives don't even realise they are at risk from bushfires, says Dr Whittaker, a social geographer at the University of Wollongong.

"People might look around and say 'Wow, bushfire is something that happens out there in the bush, not here in the suburbs'."

"As we've seen ... embers can carry fire right into what are effectively suburban environments and bring fire to people who might not be prepared for it."

"They've thought about what they're going to do, but of course on the day thinking about it isn't going to be enough.

"You can't know just how minds can flip out in this space."

Dr Every surveyed people affected by the Sampson's Flat fires in South Australia in 2015.

Under extreme stress many people reported they changed their plan at the last minute: they left it too late to go; forgot to take essential items or left their animals behind; did random tasks that wasted time; or completely collapsed and went to sleep.

"That really sparked us to think "What is this thing? What's happening here?"

While research in the past has explored the impact on communities that live in bushfire prone areas, one of the unique aspects of last season's devastating Black Summer fires was the number of tourists and holiday-home owners affected.

"We're hearing [stories] from people that had no idea that they were at risk ... or might have been aware that there were fires in the vicinity but didn't think they would be affected," he says.

"We've also heard a lot from people who have holiday homes who might have been aware of the risk to some extent, but may not have prepared to the extent that a primary resident may have just simply because they're not there all the time."

Even people who live in the bush or rural areas may have never experienced a major fire in their lifetime.

"It's very easy to come in afterwards and say when a fire's gone through that you hadn't done enough to plan or prepare.

"But we need to recognise that bushfire is not an everyday part of people's lives."

However the stakes are high. Around 80 per cent of people who die, died within 500 metres of their house.

How to plan for fire

The first thing is to consider where you live or are holidaying, and whether it could be in an area at risk from bushfire.

Even if there is the slightest possible risk, then you need to have an emergency plan:

Your emergency plan must factor a range of possible scenarios.

One of the big mistakes many people make is they don't plan for things not going to plan, says Dr Every.

"So you might say 'Yeah, I've got a bushfire plan' and that means you've thought 'Yeah, OK if a bushfire comes I'm going to jump in my car with the cat and I'm gone," she says.

"It's that kind of detail that I think people don't understand they need to plan for," Dr Every says.

You need to discuss the plan with your family or household, Dr Whittaker adds.

"One of the things we hear is that people have planned, but they haven't necessarily considered what they would do if, for example, a family member wasn't at home or it was a school day," he says.

If you'd factored on someone being home on the day to help prepare, or you hadn't factored in vulnerable people being in the house, your plan could be compromised.

"We also see risky responses when parents are separated from their children. For example, in one fire we studied, a roadblock prevented a man from returning home to help his elderly father and young child, because it was deemed too dangerous. So he went back on foot to get home."

If your child is at school it is also good to know what the school's emergency plan is.

You also need to work out what you will do if you can't implement your plan.

"If your plan is to leave, it's definitely a good idea to consider what you would do if the fire comes more quickly than you expect and it's not safe to leave," Dr Whittaker says.

"Equally, if your plan is to defend ... what do you do if you're overwhelmed by the fire? If it's worse than what you might have expected it to be, or if you lose water or power?" he says.

Planning for bushfire is not just an individual responsibility.

Communities that come together to plan for disasters and have strong social bonds and connections tend to do better, Dr Whittaker says.

"Because they are communicating with each other, they might know who the vulnerable community members are, and who might need assistance to leave or be checked on."

And developing skills to manage extreme stress will help whether you are a local or a holiday maker less familiar with the area.

"Being able to keep your cool, stay connected in the midst of overwhelming bodily impulses to flip out is so valuable for people and we can teach anybody," Dr Every says.