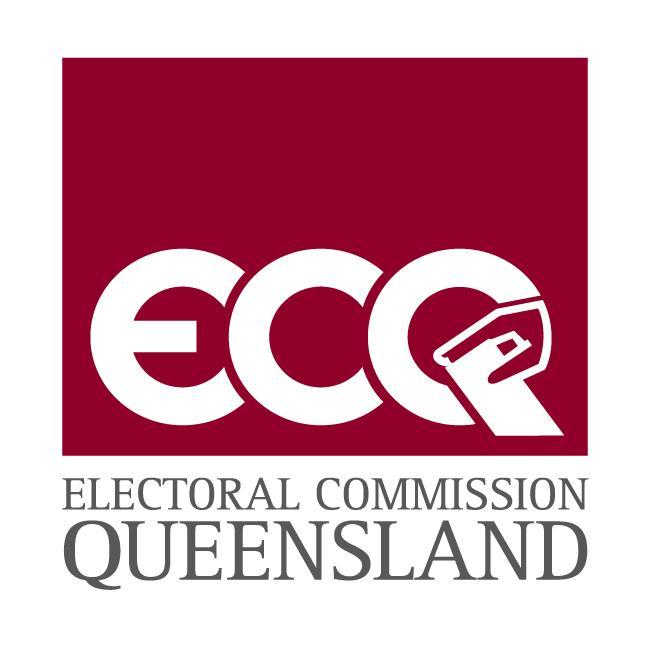 It has been announced by the Electoral Commission of Queensland (ECQ) the final report in to electoral boundaries for the Moreton Bay Regional Council.

On 1 March 2019, the Minister for Local Government, Minister for Racing and Minister for Multicultural Affairs, The Honourable Stirling Hinchliffe MP referred a divisional boundary review of the Moreton Bay Regional Council.

The Change Commission is responsible for periodically reviewing the internal boundaries of divided councils so that each division has relatively the same number of enrolled voters.

This upholds the key democratic principle of ‘one vote, one value’, by ensuring each person’s vote carries the same weight.

In conducting its assessment, the Change Commission was legally required to ensure each division of the Council has a reasonable proportion of enrolled voters, herein referred to as ‘quota’.

The Change Commission for this review consists of:

The casual commissioners were appointed by the Governor in Council on 1 November 2018.

The Change Commission has now finalised its assessment of the Moreton Bay Regional Council’s divisions.

This report outlines the recommended divisional boundaries and sets out the reasons for the Change Commission’s decisions.

A quota is determined by dividing the total number of enrolled voters by the number of councillors (other than the mayor), plus or minus 10%.

The Change Commission also considers projected enrolment, so the divisions remain in quota for as long as possible.

Projections are based on the timing of future local government quadrennial elections. Enrolment information is based on ‘Statistical Areas Level 1 (SA1)’.

SA1s are geographical units used by the Australian Bureau of Statistics (ABS) for the release of census data.

According to the ABS most SA1s have a population of between 200 to 800 persons with an average population of approximately 400 people.

Current and projected enrolment data are available for download on the Moreton Bay Regional local government review webpage on the Electoral Commission of Queensland’s (ECQ) website.

The Moreton Bay Regional Council has 298,823 voters and is divided into twelve singlemember electoral divisions plus a mayor.

Table 2 shows the current and projected enrolment for the Council’s existing divisional boundaries. 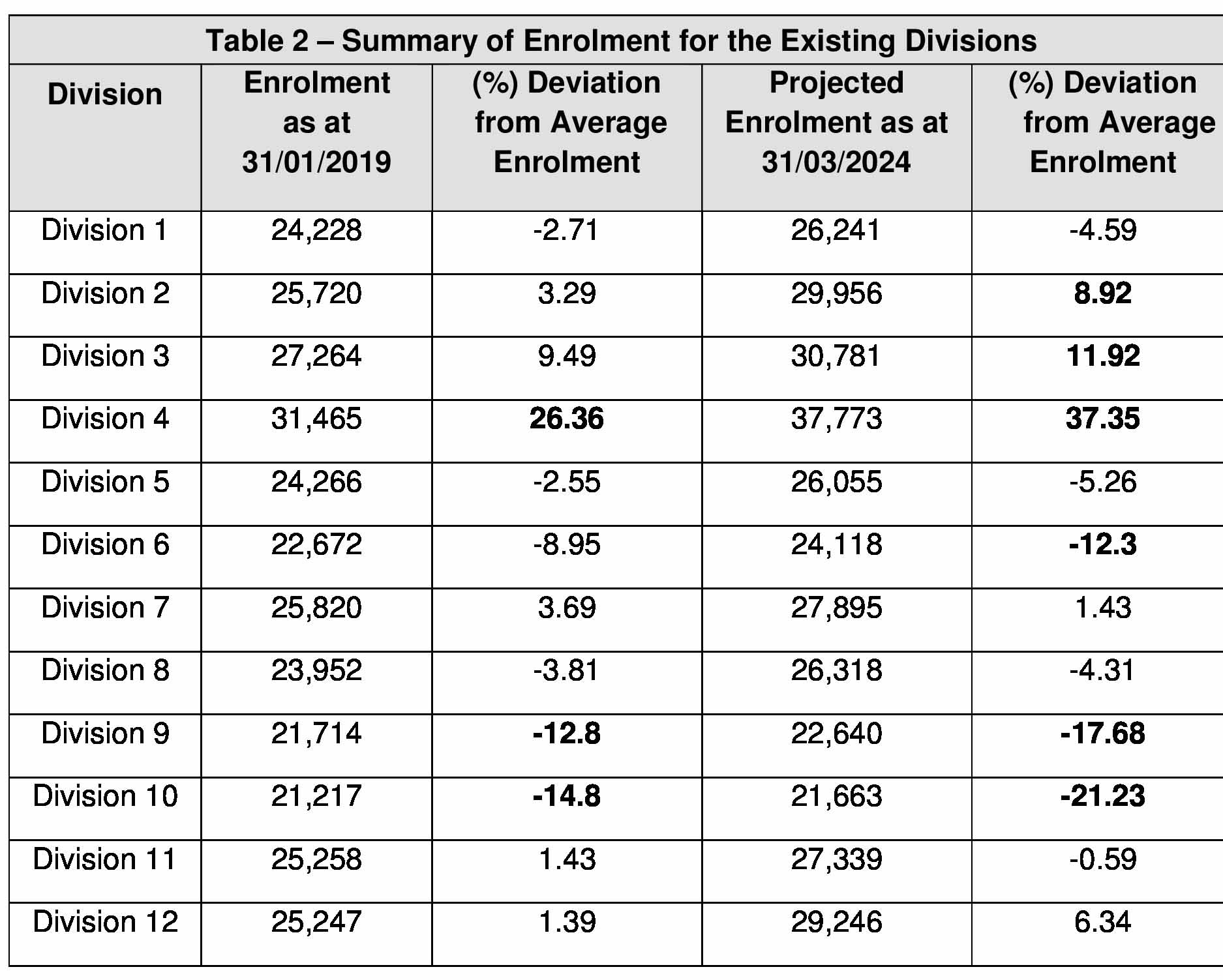 Public Suggestions The Change Commission sought public suggestions to assist in developing its proposal. Advertisements were placed in The Courier-Mail, the Pine Rivers Press and on the ECQ’s website and social media.

Suggestions were invited from 27 April 2019 to 5pm 20 May 2019. Twelve submissions were received and are available to view at Appendix C.

In its review of divisional enrolment on 29 November 2018, the Moreton Bay Regional Council provided recommendations to bring the estimated number of electors in each division within quota for 2020.

The Council enclosed maps and several tables identifying the SA1s to be transferred between divisions.

The Change Commission implemented many of the Council’s proposed realignments and determined some alternative boundaries in some instances.

Many of the submissions requested the boundary between Divisions 4 and 7 follow the Bruce Highway in its entirety, transferring Division 4’s portion of Kallangur to Division 7.

The Change Commission implemented this change in its proposal, noting it resulted in the unification of Kallangur within Division 7, whilst also maintaining the communities of North Lakes, Mango Hill and most of Griffin in Division 4.

A number of submissions requested the northern boundary of Division 8 expand further north to follow the railway line.

The Change Commission also implemented this change in its proposal, noting it resulted in the unification of Petrie and part of Kurwongbah in Division 8.

The southern boundary of Division 8 was also expanded to unite Strathpine within the Division.

One suggestion requested the suburb of Deception Bay be unified so that it is no longer split across multiple divisions.

Due to the large number of electors in Deception Bay, it was not possible to place all of Deception Bay within a single division.

It was noted that a small portion of Deception Bay that lies south of Saltwater Creek remained in Division 4, as the creek acts as a natural barrier separating these electors from the rest of Deception Bay.

The Change Commission supported a number of changes recommended in the submissions and proposed boundaries with these community interests in mind.

The Change Commission published its proposal and invited public comments on 24 July 2019.

Advertisements were placed in The Courier-Mail, the Pine Rivers Press and on the ECQ’s website and social media.

The proposed boundaries brought enrolment in each division into quota, while also catering for the significant growth projected in certain parts of the region.

The Change Commission considered feedback from the public suggestions, uniting suburbs and creating identifiable boundaries by following features such as roads and waterways where possible.

Ten were received in total, with two received after the comments period closed.

Two comments supported the proposed changes and in particular approved of the boundaries for Divisions 5 and 8.

The submitter that supported Division 8’s boundaries identified that the university campus was split under the proposed boundaries between Divisions 7 and 8.

The Change Commission reviewed the Priority Development Area (PDA) for this area and amended the boundaries to follow the railway line, uniting the PDA in Division 8.

The Division 3 Councillor advised that the Caboolture showgrounds, historical society and equestrian centre which had been proposed to move to Division 12, has shared interests with  the parts of Caboolture and Moodlu that are situated north of the D’Aguilar Highway in Division 3.

The submitter recommended these areas be united outside of Division 3, and instead the Morayfield area that had been proposed to move to Division 2 remain in Division 3.

The Change Commission modelled this submission, however could not accommodate it from an enrolment perspective, as Division 2 would have a current enrolment figure of -9.83% and both Divisions 3 and 12 had very high projected enrolment.

The Change Commission was persuaded to unite the areas with shared interests in the north of Division 3 and has retained the existing northern boundary, rather than the proposed northern boundary.

One comment raised concerns over Division 2’s proposed northern boundary in Beachmere, noting it dissects a retirement community and its facilities.

The submitter suggested moving the boundary slightly further north to contain this entire facility within Division 2. This was supported by the Change Commission.

One comment suggested an alternative boundary between Divisions 9 and 10. Instead of transferring the section of Albany Creek bounded by Sussex Street, Sandy Creek and Old Northern Road to Division 10, it was suggested to include the ‘Woodlands Estate’ between Dawn Road and the end of Windemere Road, east of Keong Road in Division 10.

This change was supported as it resulted in a relatively even swap of electors and follows easily identifiable roads.

Other matters raised in the public comments are discussed below:

• One submitter raised concerns regarding the part of Deception Bay to the west of Park Road being in Division 2 and recommended these properties be included in Division 5 as well, noting residents deserve a single dedicated representative.

While the Change Commission appreciates the desire to unite Deception Bay, and proposed boundaries that contain a large portion of the suburb in Division 5, it was not feasible from an enrolment perspective to unite the entire suburb at this time.

• One person expressed opposition to a street in Albany Creek being transferred from Division 9 to Division 10.

The Change Commission noted the transfer of this area (and street) was necessary from an enrolment perspective and was following the recommendations of public suggestions.

• Two late submissions opposed the proposed changes resulting in the Beachmere suburb being split between Divisions 1 and 2. Representation, serviceability and travel concerns were raised as justifications.

While acknowledging the desire of residents to have their suburb entirely contained in a single division, the Change Commission was not persuaded to reverse this change, as it has helped increase Division 1’s enrolment.

• One submitter requested part of Kurwongbah that is north of Torrens Road and west of Narangba Road be included in Division 11. However, as the proposed boundaries placed this area in Division 8 based on public feedback, the Change Commission was not persuaded to action this request at this late stage of the review.

Changes to the proposed boundaries

After having considered feedback from the public submissions, the Change Commission has made modifications to the proposed boundaries of Divisions 1, 2, 3, 7, 8, 9, 10 and 12.

Maps of these proposed divisions are attached at Appendix E and can be compared with the final division maps at Appendix A.

The changes are discussed below, however for further explanation please see the ‘Comments on the Proposal’ section of the report.
Divisions 1 and 2 A small realignment has been made to the boundary between Divisions 1 and 2.

The northern boundary of Division 2 has expanded slightly to unite the entire retirement village and its facilities as suggested by one of the public submitters.

Divisions 3 and 12 The Change Commission has retained the existing northern boundary of Division 3.

A submitter noted the area that includes the equestrian centre, Caboolture showgrounds and historical society shares connectivity with parts of Division 3.

As a result, the Change Commission was persuaded to reverse its proposal to shift this area into Division 12.

Divisions 7 and 8 After receiving a submission that noted the proposed boundary splits the university campus and PDA between Divisions 7 and 8, the Change Commission has determined to unite this area within Division 8 by following the railway line.

After assessing the material submitted and having considered the requirements of the Act, it is recommended that the proposed boundaries, with the realignments discussed above, become the final divisions of the Moreton Bay Regional Council.

It is noted that the implementation of this recommendation is expected to result in the following divisional enrolment: 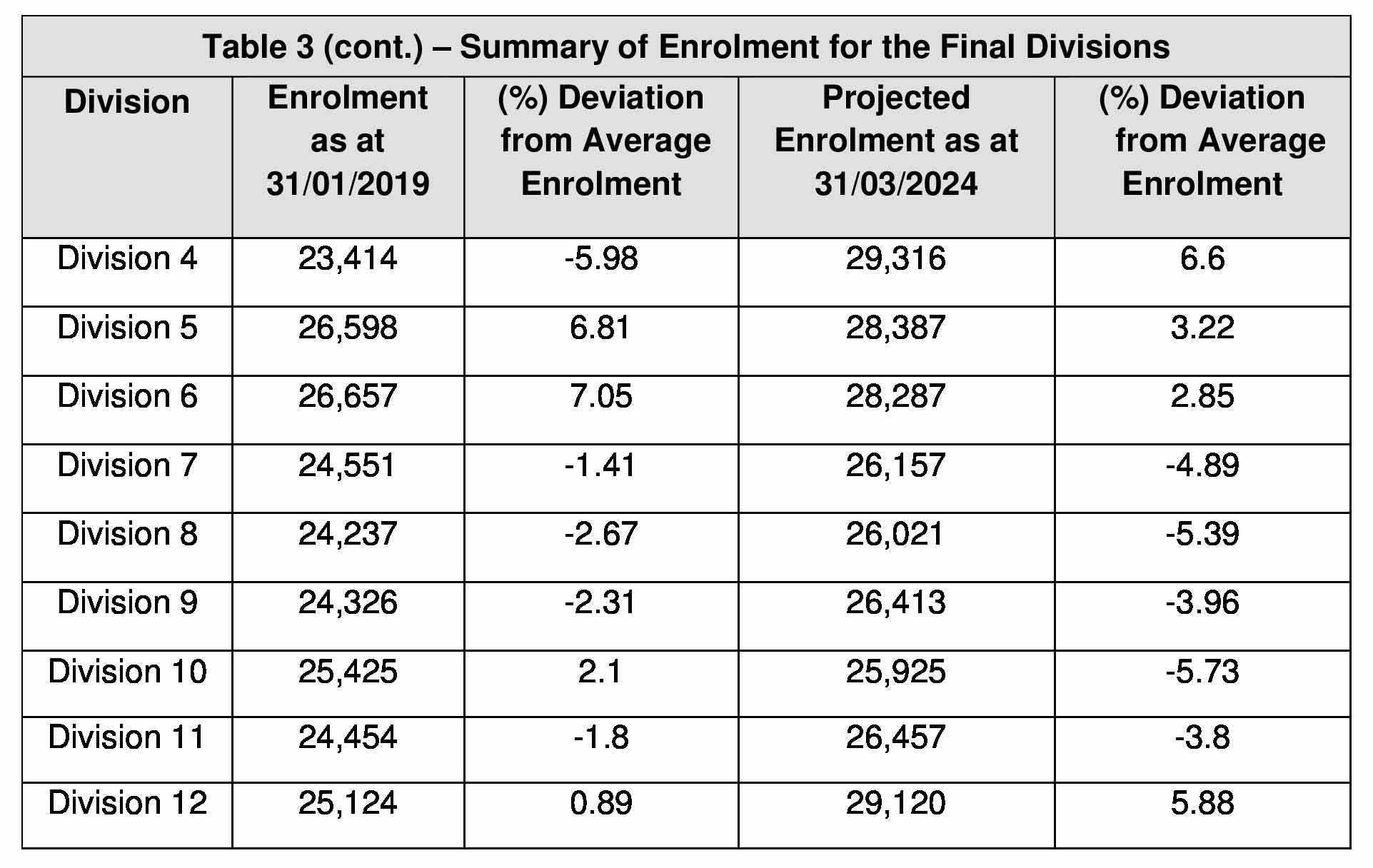