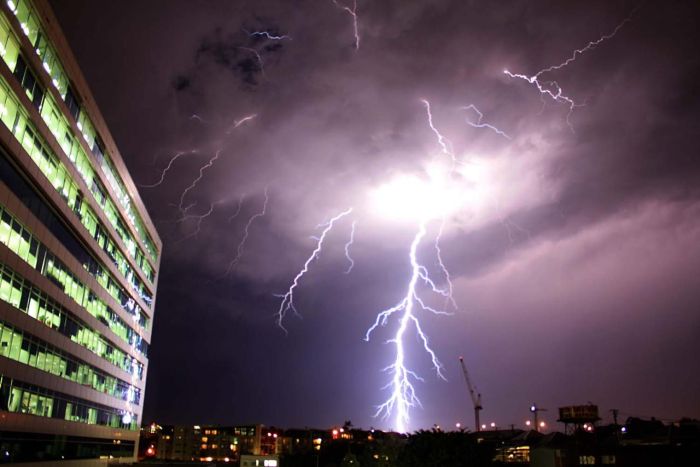 A dry trough will bring a change Tuesday afternoon with a risk of dry thunderstorms and lightning in South East Queensland.

Dry and gusty thunderstorms with the risk of lightning strikes sparking new fires are forecast to tear through the Darling Downs late this afternoon and the remainder of South East Queensland and Moreton Bay Region tonight.

Fire authorities have warned that wind gusts of up to 100 kilometres per hour are set to fan existing fires.

But the real danger is from high-voltage lightning strikes, which could set tinder-dry grazing land alight and create new spot fires.

Queensland Fire and Emergency Services (QFES) Acting Chief Superintendent Kevin Reading said they were expecting new fires to be started by the storms "because of how dry the ground is".

"As the lightning strikes, the electricity has an element of heat to it so that heat could catch a piece of dry grass that has no moisture in it," he said.

"We've got water aircraft on standby, we've repositioned aircraft, we've replenished all those water tankers that we had out west in the Granite Belt, our firefighters are rested and we've got additional firefighters come in from interstate," he said.

The Bureau of Meteorology (BOM) said temperatures today would hover around 30 degrees Celsius, with severe thunderstorms forecast to hit from around 5:00pm.

The high temperatures and "gusty erratic winds" could make conditions as dangerous for fires as they were across south-east Queensland last week.

"The trough will move quickly and is likely to hit the coast around midnight tonight before it heads out to sea."