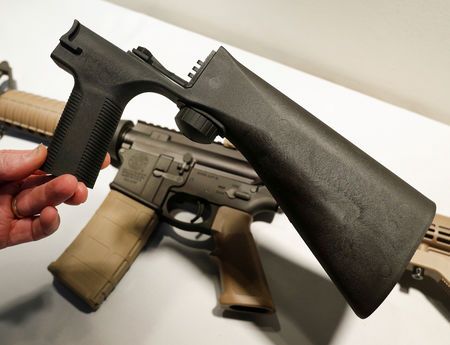 Minister for Police and Minister for Corrective Services the Honourable Mark Ryan MP has welcomed an amendment to section 8 of the Weapons Categories Regulation 1997 which makes ‘bump stock’ devices a Category R weapon.

A ‘bump stock’ is a device designed to attach to a firearm that uses recoil generated by the firearm to increase the firearm’s rate of fire.

The device, when fitted to a firearm, can have the effect of giving a semi-automatic weapon (typically Category C or D) the firing speed of a fully automatic machine gun (Category R).

Minister Ryan said the Queensland Government was keen to address the issue of ‘bump stocks’ having seen the devastation they can cause.

“58 people were killed, and a staggering number of others injured, in a  Las Vegas mass shooting in which a ‘bump stock’ was used,” Minister Ryan said.

“That’s why we are prohibiting individuals from possessing ‘bump stocks’ and placing them in the Weapons Categories Regulation as a Category R weapon.”

Commissioner Ian Stewart said increasing a firearm’s firing speed greatly increased the harm that may be caused and posed a significant risk to public safety.

“Possession of such a device undermines the national prohibition on fully-automatic weapons, as well as the firearm registration system, which aims to control the type and capacity of any firearm an individual may possess.

“Not only does this protect us from future sales of ‘bump stocks’ that may have been used to cause harm, but unlawful possession of a Category R weapon carries a maximum penalty of seven years.

“If you are in possession of a ‘bump stock’ you should immediately take it to your local police station and surrender it.”