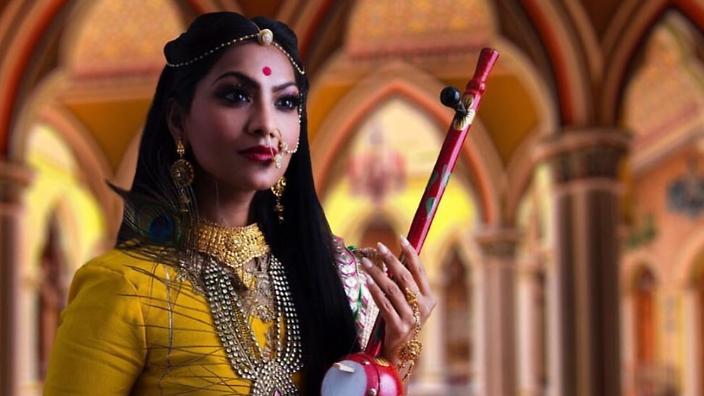 Aarti Bajaj, the multifaceted Australian-Indian creative director of Wild Dreamer Productions and lead performer in the stage spectacular, MEERA has created history by taking a pioneering step in the field of Indian performing arts.

The mother-of-two and medical sonographer is also the director of Gold Coast-based Indian classical and contemporary dance academy, Navrasa.

Ms Bajaj is on a mission to spread Indian culture through dance and arts, proving there is more to Indian performing arts than Bollywood.

“There is so much more to Indian dance, it is not properly propagated or spread in the wider world. Being professionally trained with a degree in dance, I am really passionate to bring real colours out to the world,” said Ms Bajaj.

“My goal is to break different boundaries using globalisation and modernisation, to shine a light on different cultures multiple art forms, races, cultures collaborating together on professional platforms.”

MEERA, the brainchild of Ms Bajaj, is the ambitious first offering from Wild Dreamer Productions, a ground-breaking Gold Coast based production house committed to pushing boundaries beyond the social norm.

“MEERA is a bold love story from 16th century Northern India about a royal Princess who believes in her love for Krishna (a Hindu God) to such a degree that she is willing to go against the norms of society for her love,” said Ms Bajaj.

MEERA made its debut and world premiere in spectacular fashion to a full house of 1,100 people at the Gold Coast's Home of the Arts in November, 2018.

And 2019 started as a year of new journeys with the announcement the production will play six shows at the ASB Waterfront Theatre in Auckland on the 31st May, 1st June and 2nd June this year.

A select few of the Australian cast and crew of more than 300 will tour with the production to Auckland, with auditions having taken place in the City of Sails last week.

“My ultimate goal is for MEERA to see all the beautiful stages and audiences across the globe, to sing out beautifully and loudly so everyone can get involved.”

Another major motivation for Ms Bajaj is to create a platform where she can give different artists the opportunity where they don’t need a profile to share their talent - if they have talent, she intends to bring the platform to them.

Ms Bajaj's tireless work to expose Indian culture to a broader audience has been recognised with her being named as one of three finalists in the inaugural Gold Coast Bulletin and Harvey Norman Gold Coast Women of The Year awards in “The Entertainers” category, and a nominee in Pro Bono Australia's 2018 Impact 25! awards.

Furthermore, after three rounds of auditions, Ms Bajaj has been selected to represent Australia at the 23rd Annual World Championships of Performing Arts 2019 – often referred to as “The Talent Olympics”.

The World Championships of Performing Arts is the only international performing arts talent competition of its kind, held annually in Hollywood, Los Angeles.

The World Championships of Performing Arts will see teams of dancers, singers, actors, models, instrumentalists and a variety artists compete for Gold, Silver and Bronze medals in July 2019.

Aarti says the selections for contestants were held in the USA, Canada, Caribbean, Central and South America, Europe, Asia, Africa and Australia

“It’s hard to come out of your comfort zone and compete at any level,” said Ms Bajaj.

"However, it is such a great honour to be representing Australia on the world stage."