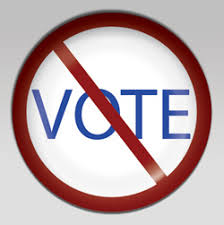 Looking at the Federal Seat of Longman, regarding elections or by Elections it's noted that almost a quarter of voters either did not vote or put effort in spoiling their vote by voting informally, surprising isn't it, or is it?

The pattern we see here is with each election as years pass in Longman  are either not voting at all or if they do make it to the ballot box produce a non vote and the sheer number of people doing this is getting bigger and bigger with every election 11% in 2013, 16 % in 2016 and now 19% in 2018.

The question is why are the non contributors to elections increasing in number and could it be we reach a third of the electorate not vote meaningfully by the next election.

Are the non voters disenchanted with the candidates, is it policy by Government, a general dislike of the leaders of the majors or is it a growing trend to apathy to politics in general, maybe just maybe we are all sick of the frequent elections.

Is people power the answer, and is resonance with the community important. Clearly in one electorate of Mayo in South Australia at the Super Saturday By Elections, showed that one candidate did resonate well with that electorate and with a bare bones amount of money, but with over 800 volunteers went on to secure an even bigger margin as a safe seat of an independent.

The next Federal Election is due by May 2019, it will be interesting to compare the notes of this story with the result.

Campbell Newman: Well done! Are the 20% conscientious objectors? That was the intention of my vote.. sick of the lies, the ridiculous spending, the erosion of our rights., the only way forward is to sack them all and bring in a government that remembers they work for us and are accountable to us, not the other way around! Hopefully at next election we can reach 50% conscientious objectors..
David Simmons: This does not surprise me at all. Our system of government is so far out of tune with the times it is laughable. The party can put out the most outrageous policy and promise the world. But as we know these policies never see the light of day due to our system of senate and opposition. Would it not be better to have a list of policies say 10, and these policies is what you base your campaign on. Once elected no one can block them. So the policies must be able to be fully funded and they would be what the majority of people actually want. That would stop all the BS policies they put out there and it would make people trust them. I would assume this would bring more people to vote because at the moment it is all smoke and mirrors.