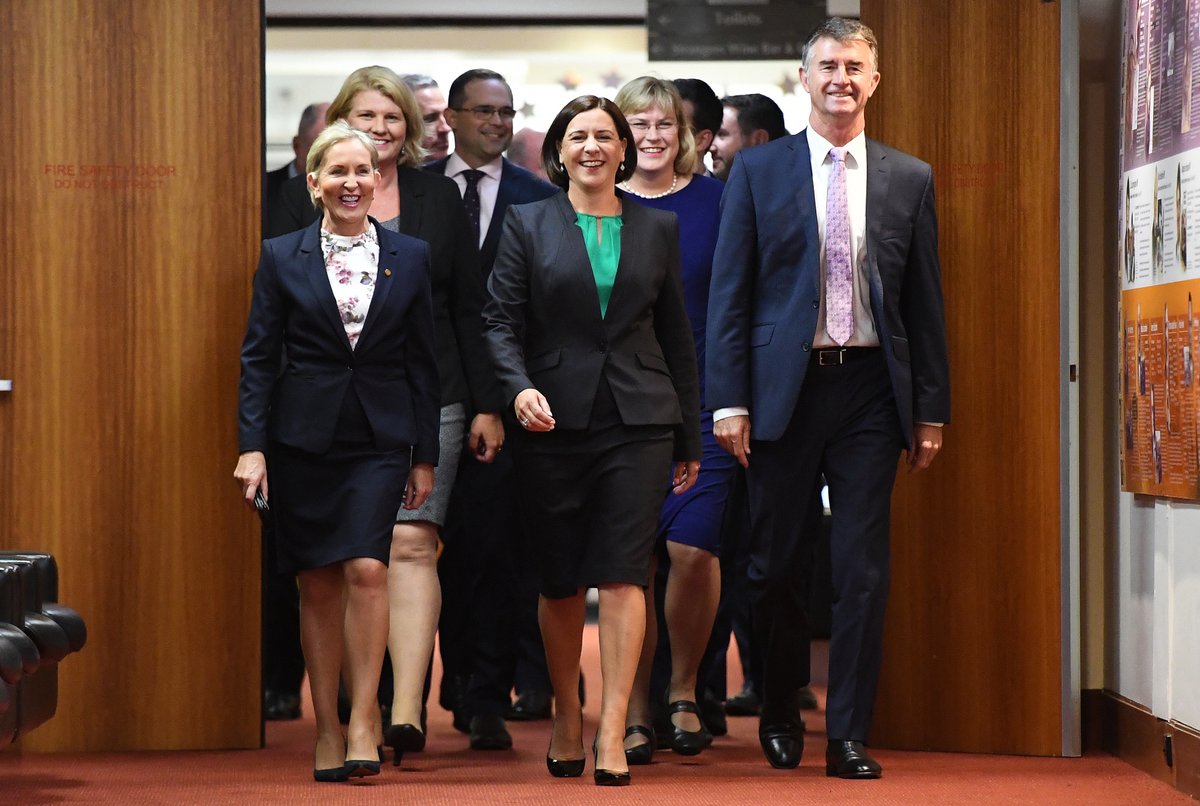 LNP leadership battle 2017, and the winner is... Member for Nanango Deb Frecklington with Tim Mander as Deputy

In a bid to turn around the LNP's political numbers the last election saw it's primary vote slumped below 1 million voters to 33.6 per cent, and its seat count went backwards despite a larger parliament, including a virtual wipeout in north Queensland and a poor showing in Brisbane.

With that result Tim Nichols conceded defeat in the election, congratulated Annastacia Palaszczuk and bowed out of the leadership role.

At 2 pm the contenders arrived with Leadership contender Deb Frecklington, whose seat lies in the traditional National Party heartland walked in with 10 colleagues, John-Paul Langbroek was flanked by just one MP only 3 supporting Mark Robinson, at  the LNP party room in Parliament house, speeches performed and in the end the vote counted among all returned LNP mp's.

One and a quarter hours later 39 members votes and chose Deb Frecklington to be the new leader  with Tim Mander as Deputy.

Ms Frecklington has vaulted into lead contention after just five years as an MP.

The former property and family lawyer combines television-friendly charm with a penchant for verbal combat in Parliament.

But in the face of bleeding protest votes to One Nation, she said the LNP must "listen, regroup and rebuild faith in the LNP as the only conservative party that can actually deliver for Queenslanders".

In her debut speech to the Queensland Parliament in 2012, Ms Frecklington sounded a warning about the "over-simplistic solutions of the far right [that] would see many of us worse off in a very short period".

She said the answers for regional Queenslanders did not "lie in living in the past".

However, Ms Frecklington did pay tribute to the "great" Sir Joh Bjelke-Petersen, her predecessor in the seat of Nanango — without any reference to his divisive record and the systemic official corruption that flourished on his watch.

Ms Frecklington, who was 15 when Sir Joh was forced to resign, said last week: "I want to recreate for my three daughters the Queensland I experienced when I was growing up, but also a state that's geared up to tackle the challenges of the future".

If she wins the LNP leadership, Ms Frecklington would lead a party with only six female MPs, which is 15.4 per cent of the LNP's held seats, versus Labor with 23 women in its 48 seats, at 47.9 per cent.

The former dentist of Surfers Paradise, an affable and polished figure who led the party until making way for the Campbell Newman phenomenon in 2012, fired a salvo across Ms Frecklington's bow when putting up his hand.

Mr Langbroek pointed out he was on track to win before Mr Newman anyway, telling The Courier-Mail newspaper his numbers then — a 60-40 lead on the two-party preferred vote and his lead as preferred premier — were "unheard of in modern politics".

Mr Langbroek says he is the first dentist in State Parliament since 1938.

A 13-year MP in one of the LNP's safest Queensland seats, Mr Langbroek came to politics via his membership of the Surfers Paradise Chamber of Commerce.

A strong advocate of water fluoridation for dental health, Mr Langbroek noted when he was elected in 2004 he was the first dentist in Parliament since 1938.

Known to all who deal with him as "JP", Mr Langbroek talks of returning the LNP to a simple pitch, managing the state budget, looking after families and communities, and rewarding individual initiative with "a hand-up, not a hand-out".

His sister Kate has also been in the public eye as a television and radio personality.

Mr Langbroek has been a backstage guest at music festivals — once watching a Hilltop Hoods show at close quarters — and agreed to do a music video "dance off" against Labor's Jackie Trad to the tune of Taylor Swift's Shake It Off.

The Oodgeroo MP from Brisbane's bayside is the outlier in a three-horse race.

Mr Robinson, a born-again Christian with a doctorate in cultural studies, has described himself as a "very grassroots person".

He has been in Parliament four more years than Ms Frecklington, but is less experienced in senior roles.

Mr Robinson has described himself as a "very grassroots person".

Mr Robinson has asked the LNP partyroom to overlook his two rivals in favour of "a completely new leader and a new direction".

"I think politics today in Queensland is becoming increasingly localised and people are looking for more of a grassroots style of leader and a consultative style of leader rather than a top-down leader," Mr Robinson told the ABC on Sunday.

The Victorian-born 54-year-old was a TAFE teacher and chaplain and helped build an orphanage in Indonesia in 2008.

The former deputy speaker is among Parliament's staunchest opponents to legalising abortion in Queensland.

His social worker wife Julie made headlines during the election campaign by taping posters reading "It's OK to vote No" to the electorate office window of a rival Labor MP who supported same-sex marriage.

Mr Robinson was one of a handful of sitting MPs whom One Nation consciously chose not to run against.

He pledged to be "more constructive" working with a crossbench of three Katter's Australian Party MPs, a Green, a One Nation MP and an independent.

"I think sometimes politics is too combatitive (sic) and people are getting tired of that," Mr Robinson said.

"That sort of cut and thrust and harshness of politics is not something that suits me and won't be part of my leadership style."