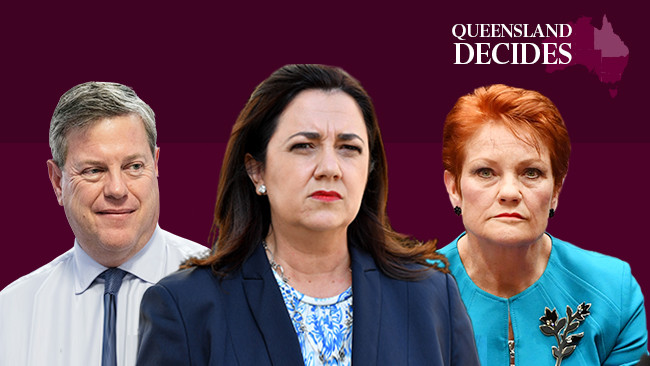 Projection for a current break down seat in parliament for Labor 43, LNP 38 Other 2 and One Nation 0 with 10 not clear

Labor will end up with more seats than LNP, majority unclear.  93 seats are up for grabs, the parties need 47 for a majority

Annastacia Palaszczuk went to the election asking for stability at her press conference while not claiming victory, is confident of being re-elected with the minimum required 47 seats for a majority but Queensland will have to wait a few days before all the votes are counted before claiming a win.

Annastacia Palaszczuk addressing her supporters. I said it would be like climbing Mt Everest.  Tonight we are close to the peak, but we are not quite there and we will not get there tonight. But I remain confident we will be able to form a majority Labor government once all the votes are counted.
Tim Nichols Leader of the Opposition speech:
Tim Nichols leader of the LNP also addressed the party faithful a short time later.  "What is abundantly clear is tonight Queenslanders have voted to shake things up".  The Premier has not won a majority in her own right.  But let's be realistic nor have we. There are still over 360,000 postal votes to be counted over the coming days.  There are between 10 and 14 seats currently in doubt across Queensland, and those seats will determine the ultimate outcome.
Tim Nicholls is signalling again that he would work with crossbenchers in a hung parliament.  "I have always said that I will respect the will and the vote of the people of Queensland and I will keep my word in that respect, I will keep my word. He says the real question is if the Premier will keep her word."    "Will Annastacia Palaszczuk and Labor keep their word that they will do no deals with the One Nation party, no deals with independents, no deals with minor parties?"  "That was her promise."
Some Key losses and Gains:
One Nation's leader Steve Dickson is out. Malcolm Roberts didn't win Ipswich. But they do have a chance of picking up Mirani.  Stephen Andrew is ahead of sitting Labor MP Jim Pearce. independent Margaret Strelow ahead in the seat of Rockhampton.  Former Labor Minister Leanne Donaldson has lost her seat of Bundaberg to the LNP.

The big question now is even if Labor does not win a 47-seat majority, it may be forced to remain in government, according to ABC election analyst Antony Green.

"There's a high probability that Labor won't get to 47 and they're going to fall short, but there's no clear alternative government and in those circumstances the Government can't resign," he said.

"David Bartlett tried that in 2010 in Tasmania — advised that Michael Hodgman become premier, and the [Tasmanian] Governor rejected the advice because there is no point appointing somebody as premier who's going to go to the floor of the parliament and promptly lose.

"So despite what Labor said, if they have the most seats, they will probably have to face government."

Green said with no obvious coalition of alternate parties, the Liberal National Party could not present the Queensland Governor with an acceptable alternative.

"The Premier has to advise somebody be approached but if Tim Nicholls is the leader and he doesn't have an agreement with the crossbenches, you can't advise him to become premier.

"That's what happened in Tasmania in 2010 where David Bartlett asked the governor to appoint the opposition leader as the new premier before facing Parliament and the Governor said, 'no, you can't that, there's no certainty that he can govern'.

"The current [Queensland] Government may well have to go to the Parliament. It's different from last time because Annastacia Palaszczuk could clearly form government and could face Parliament."

"So that's the procedure that's been adopted with the fixed-term parliaments, so if there's no clear government out of today, then, you know, the question is whether this parliament would last three years and how you get out of it."