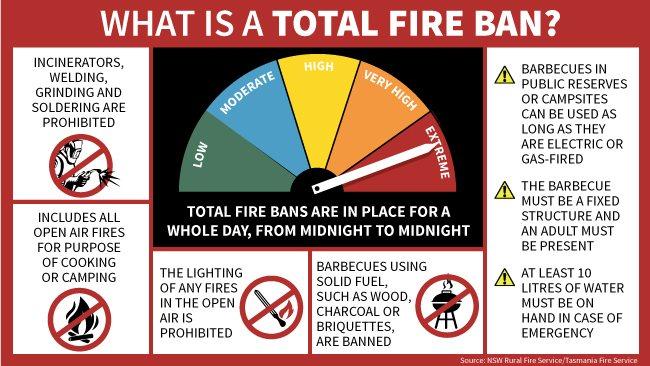 A severe fire weather warning has been issued by the Bureau of Meteorology.for the Moreton Bay Regional Council area
The Queensland Fire and Emergency Services (QFES) has advised that the Mt Nebo and Mt Glorious Early Warning System Siren 1 has been activated and will be sounded at 7pm tonight and then tomorrow at 7am, 12pm and 7pm while conditions persist.
There is a fire in the Dundas area (West of Mt Glorious) which may pose a potential threat to the Mt Nebo / Mt Glorious area; however, residents should listen for changes in siren tones, monitor local conditions, stay tuned to fire weather warnings and advice, and consult their bushfire survival plan to view their options.
For more information about the siren and current fires in the areas call 1800 686 326 and visit http://www.ruralfire.qld.gov.au/map
For more information about the fire weather warning visit the Bureau of Meteorology website at http://www.bom.gov.au/qld
For more information about being bushfire prepared visit the Rural Fire Service website at http://www.ruralfire.qld.gov.au  to PREPARE.ACT.SURVIVE

QUEENSLAND FIRE AND EMERGENCY SERVICES - PROHIBITION ON THE LIGHTING, MAINTENANCE AND USE OF FIRES IN THE OPEN

Current fire conditions have been assessed and with due regard to the weather forecasts issued by the Bureau of Meteorology, a Local Fire Ban is hereby imposed by Queensland Fire and Emergency Services as described below.

All residents in these local government areas will be prohibited from lighting a fire in the open, unless it is within a properly constructed and supervised barbecue.

All Permits to Light Fire previously issued are hereby cancelled until further notice.

Information on Fire Bans and the exemptions that can apply to a ban of the lighting of fires in the open can be found on the Rural Fire Service Queensland website. www.ruralfire.qld.gov.au

Note: Power tools including lawn mowers and mechanical slashers may be used, however the Queensland Fire and Emergency Services encourages people to use these with extreme care and to ensure that adequate equipment is available to extinguish any fire that may start. This could include having a person available to watch out for any ignitions that occur.

QUEENSLAND FIRE AND EMERGENCY SERVICES - PROHIBITION ON THE LIGHTING, MAINTENANCE AND USE OF FIRES IN THE OPEN

There is currently a fire ban in place from 00:01 Friday 15th September until 23:59 Monday 2nd October for parts of the Brisbane City Council and Redland City Council.

All prior permits to light fires are now cancelled

From The Bureau of Meteorology:

Weather Situation
A very dry airmass will combine with fresh to strong and gusty southeast to southwesterly winds over northwestern and southeastern parts of the the state to produce Severe Fire Dangers.

For the rest of Thursday 14 September:

The Rural Fire Service Queensland advises you to:
- Action your Bushfire Survival Plan now.
- Monitor the fire and weather situation through your local radio station,
www.ruralfire.qld.gov.au and www.bom.gov.au.
- Call 000 (Triple Zero) in an emergency.
For information on preparing for bushfires go to www.ruralfire.qld.gov.au.