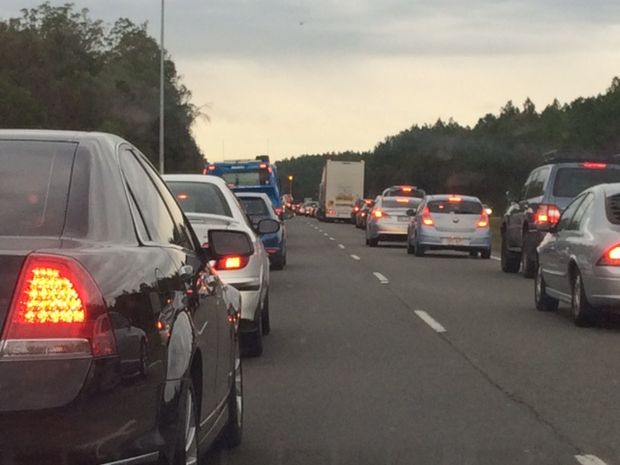 Palaszczuk Government boosts the Bruce on the Sunshine Coast

The Palaszczuk Government will boost the Bruce with a 20 per cent investment of $132.5 million in funding to upgrade the Bruce Highway between Pine River and the Caloundra Road Interchange.

Minister for Main Roads and Road Safety Mark Bailey spruiked the Bruce on the Sunshine Coast today as part of his 1700 kilometre Bruce blitz road trip up the Queensland coast to talk about the record roads program the Palaszczuk Government is delivering.

“Our $132.5 million investment, combined with the Australian Government commitment, means a huge $662.5 million boost to this section of the Bruce, making it a safer and more efficient link,” Mr Bailey said.

“An $8 million planning study is currently being fast-tracked for completion later this year but we know from preliminary results, that six-laning the 11 kilometre stretch between Caboolture and Steve Irwin Way is the highest priority so this funding will likely go towards delivering that section first.

“The exact scope and timing for the project is subject to the planning study currently underway.”

Mr Bailey said this commitment was part of the Palaszczuk Government’s record spend on road and transport infrastructure across the state for the second year in a row, delivering around $21 billion of investment over the next four years and supporting 17,000 jobs,” Mr Bailey said.

“It’s also part of the $8.5 billion ten year Bruce Highway Upgrade Program to improve safety and reduce serious injuries along the whole stretch of the highway form Cairns to Brisbane.

“We’re delivering $351.4 million of road infrastructure in 2017-18 for the North Coast district alone and there are $2.414 billion of works planned and an average of 2,066 direct jobs supported over the next four years.

“This includes our ongoing commitment to delivering the jointly funded $929.3 million Caloundra Road to Sunshine Motorway upgrade which is now under construction.”

Mr Bailey said the Palaszczuk Government had been able to reduce the impact of this upgrade on the local environment as a result of extensive consultation and by working closely with a range of stakeholders.

“The Palaszczuk Government was elected with a commitment to genuine consultation and community engagement,” Mr Bailey said.

“The improved interchange upgrade and the expansion of the Mooloolah River National Park as part of this project is a clear example of us delivering on that commitment.”

“$4.9 million will be invested in 2017-18 for the North Coast which means local governments will be able to fund the development of transport related infrastructure,” he said.

“This is more than a 90 per cent increase in funding compared to what the LNP committed in their last budget.”

Mr Bailey said the Budget also focused on cyclists, with $18.6 million planned for new cycling infrastructure across Queensland in 2017-18, which includes $2.3 million for the North Coast.

“The Palaszczuk Government is committed to making cycling safer and more accessible for communities across Queensland,” he said.

“We have also awarded $17 million to 30 local governments across Queensland for the delivery of an additional 35 kilometres of cycle network.”

$120 million in 2017-18, to upgrade the Bruce Highway from four to six lanes from Caloundra Road to the Sunshine Motorway, at a total cost of $929.3 million

$34.5 million in 2017-18, to install safety barriers at various locations on the Bruce Highway between Brisbane and Gympie, at a total cost of $79.8 million

$5.2 million in 2017-18 for the Kawana Way and Nicklin Way, Sunshine Coast University Hospital intersection upgrade package, at a total cost of $22 million

“We’re repairing the damage done by the LNP who slashed roads funding by $600 million and stalled road infrastructure across Queensland,” he said.