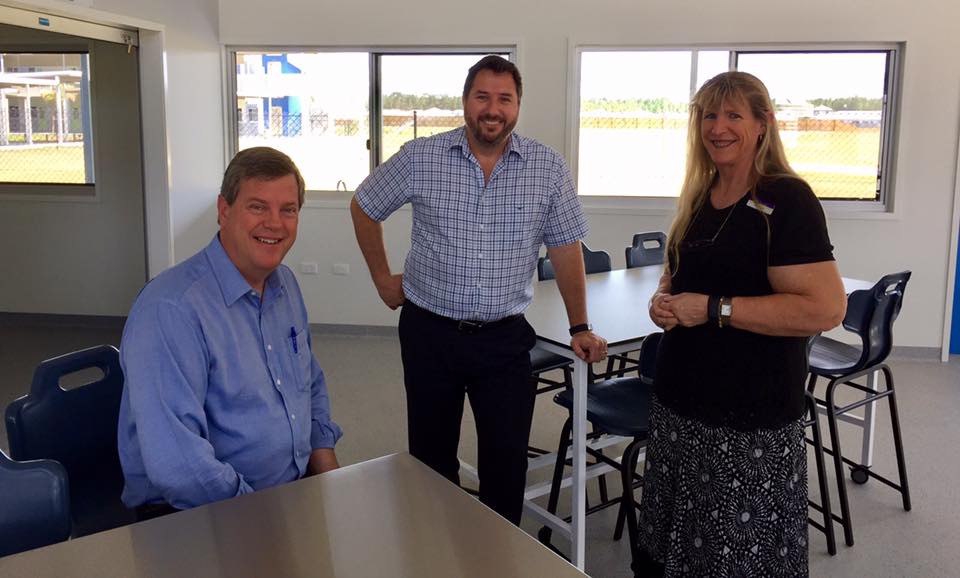 Member for Glass House, Andrew Powell MP, yesterday welcomed Tim Nicholls MP, Leader of the Opposition and Shadow Minister for the Arts and Major Events, to the Glass House electorate to showcase some recent achievements, outline the issues Mr Powell is fighting for and to introduce Mr Nicholls to the locals.

The day began with a tour of the new Pumicestone State School which was approved and funded by the LNP Government as part of the Public Private Partnership (PPP) roll out of ten new schools and will open its doors to students in 2017.

“I am very impressed by the state of the art facilities that Pumicestone State School will provide to their new students and the many opportunities that will be presented to them”, Mr Nicholls said.

Mr Powell said that the school has already attracted nearly 300 new enrolments for 2017 and has the potential to grow rapidly in the coming years.

Mr Nicholls joined Mr Powell in his commitment to get out and about listening to locals and continued on to the Woodford region.

“In visiting Woodfordia and the Woodford Sale Yards I was able to highlight to Tim the diversity of our local communities – the artistic and creative excitement that is the Woodford Folk Festival and the honest, hardworking, salt of the earth cattlemen and women, one of our many local agricultural pursuits”, Mr Powell said.

“I certainly enjoyed catching up with Bill Hauritz in my capacity as the Shadow Minister for the Arts and discussing what goes in to running an annual, week long music and art festival that attracts so many visitors to the region”, added Mr Nicholls.

“It was great for us to catch up with many of the buyers, sellers, and the “tyre-kicker” - those just looking - at the Sale Yards in Woodford.  There’s no better place to meet the locals on a Monday morning”, Mr Powell concluded.

The morning concluded with a morning tea in Woodford where almost 40 locals had the opportunity to share their views with their local State Member and the Leader of the Opposition.