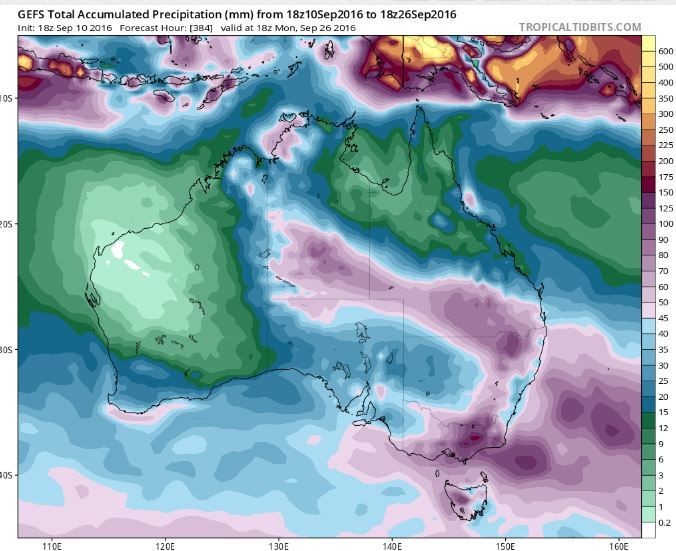 Possible storms may impact on Moreton Bay Region this week

The stage is set for some big rains across inland Australia and South Eastern Australia, but almost everyone should get something from the upcoming fortnight of weather coming up.

The combination of enhanced moisture from an unusually warm ocean to the north and north-west of Australia will combine with multiple trough systems to funnel moisture southwards through inland Australia and to the SE.

Mid September is shaping up to be the start of summer like storms to be rolling through the South East Queensland forecasting area and this week will herald the start of a summer trend of higher then average rainfall.

The modelling is showing signs for a wetter summer for Queensland and tropical northern Australian for 2016-2017 and with that its anticipated we will see more cyclones then last year as we enter a La Niña phase.

There is a possibility of these heavy rains of upwards of 100 mm predicted to result in some flooding in some areas, with much of the activity to commence on Thursday.

This week a complex weather pattern is developing over Australia today with a low pressure system over South Australia, a trough extending North into the Northern Territory, and a secondary trough through Southern inland Queensland and  Northern inland New South Wales.

The low is forecast to dump heavy rain through South East South Australia and most of Victoria over the next 48hrs with flash flooding and river flooding likely. Widespread rain is also likely across most of New South Wales.

The trough through Southern Queensland & Northern New South Wales will deepen during the next 3 days to produce widespread rain and storms with moderate to heavy falls likely, flooding is also likely!

In the Moreton Bay Region should we get a higher then average dumping of rain,  we are well placed to weather the storms by being prepared.

Residents are urged to ensure you have spare batteries for radios to tune in to Moreton Bays Home of emergency service 101.5 fm where regular updates will be put to air at regular intervals as well as updates on our facebook page and website.

The latest information based on Bureau forcasting shows a series of upper level troughs is expected to bring widespread rainfall to the west and central southern interior of the state over the next seven days.

Widespread rainfall totals of 50mm to 100mm are possible with totals in excess of 100mm possible locally.

The forecast rainfall is expected to produce river level rises across the Flood Watch area.

Further severe storms are possible today and residents are being urged to stay updated.