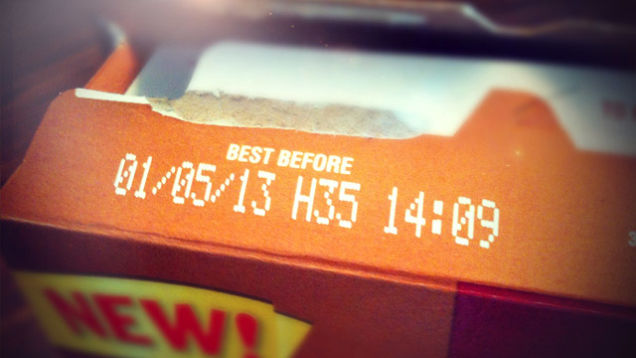 Everything you need to know about food poisoning, tummy bugs and use-by dates

Should you drink milk if it is past its use-by date yet still smells pretty fresh?

The answer is surprisingly divisive.

We spoke to experts about food poisoning, tummy bugs, expiry dates and human tendency to hedge our food bets as part of National Science Week.

Many bacteria that cause food poisoning already exist in the guts of animals or in raw food.

The point at which they can make someone sick depends on the person's immune system and how much the bacteria has multiplied under certain conditions, such as food not being stored below 5C.

Viruses can also be spread by food and make you sick, such as hepatitis A spread on unwashed salads or oysters raised in contaminated water.

What bugs harm who?

The more common bacteria include salmonella — which can contaminate foods such as poultry, eggs, milk or vegetables — and clostridium perfringens, which typically contaminates meat dishes.

Uncooked meat can be a breeding ground for bacteria. (Flickr: Penn State)

Bacillus cereus typically germinates on cooling rice and can produce toxins that cause diarrhoea and vomiting.

Sydney TAFE food technologist Vera Szopen warned bacteria such as Listeria had been known to cause fatalities and was particularly dangerous for pregnant women.

"Elderly people or people who have had a compromised immune system are also quite susceptible," she said.

Best before v Use by

One of the common ways to avoid food poisoning is to look at food labels, although they can be confusing.

Product labels are governed by Food Standards Australia and both advise people on whether a food product is too old to eat and help legally protect food manufacturers if somebody gets sick.

Not everything comes with a clear expiry, including food imported from countries with different food label standards. (Supplied: Duncan Welgemode)

"Best before means it's not really a food safety risk [to eat after this date] but the quality may be decreased," she said

"Use by is around whether the food can be unsafe.

"What's interesting is that a product with a shelf life greater than two years, it doesn't even need a best-before date ... so some canned products."

Do people even care about labels?

Not everybody, if these stories shared by listeners are anything to go by.

"My girlfriend is pretty dynamite on throwing things out when their use-by date is up. I'd prefer to use my nose. You've got to use your common sense."

"I take no notice of best-before dates at all. Use-by dates, I take as a general guide that if it's past its use-by date, I need to be more careful and use common sense."

"I throw a little bit to the cat. If the cats eats it, then it's good to go. If that cat walks away from the little bit of chicken, don't you eat it either."

"Use your nose but give it some help with chicken. If it's slimy, wash it with warm water, then smell it. The slime itself can be a bit rancid but if you wash the chicken it's fine."

"If it smells a bit pongy, out it goes."

Does the sniff test pass?

"Some bacteria we use to help ferment food are good, such as those producing yogurt, cheese, salami," she said.

"So those things, when you could smell it or it has a bad taste, could be bacteria but not necessarily harmful stuff."

But what could hurt us will not necessarily have a strong pong.

"I think I'm guilty of using yogurt and milk one day beyond its use-by date, but after looking into it for this [interview] maybe I won't be."

So what can be done?

The key message is to be aware of both the risks and take some basic everyday measures.

"The best practice is to keep things in the fridge as long as possible and then once it's past their use-by date, when in doubt, throw it," Ms Ren said.

Ms Szopen's everyday tips include always washing your hands before preparing food, thoroughly cooking food like chicken and eggs, and keeping food out of "the danger zone".

"If I'm cooking rice, I won't have it sitting around at room temperature for a while."

Staphylococcus aureus can cause boils and infection of the body. (702 ABC Sydney: Amanda Hoh)