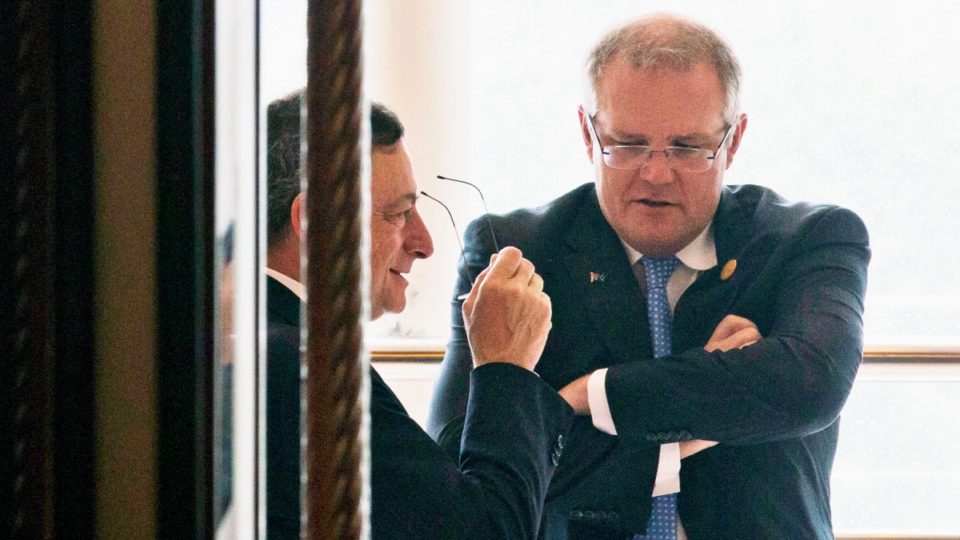 The federal government must intervene in the economy

Economists around the world are grappling with an embarrassing problem – seven years after the GFC credit-crunch, ailing economies just aren’t responding to stimulus measures the way they should.

Governments who have thrown everything at the crisis continue to be disappointed by low growth figures, and inflation rates are still threatening to turn negative – the dreaded curse of deflation.

Yet again, the International Monetary Fund has downgraded its global growth projections. And once again it is calling on developed nations to boost sagging private-sector demand by spending up big on infrastructure.

This is not what pre-GFC economics would have predicted, and economists are only slowly coming round to the view that the monetary and fiscal policy toolbox has lost its effectiveness.

When those two tools aren’t working, the other option is structural reform, as IMF boss Christine Lagarde pointed out at the latest G20 meeting of finance ministers in Chengdu, China.

“Structural reforms are particularly critical,” she said, “… well-designed structural reforms can lift both short- and long-term growth and make it more inclusive. Further trade liberalisation is also crucial to bolster productivity and global growth, while taking steps to ensure the gains from trade are shared widely.”

The problem is that even those long-held orthodoxies are being questioned. The textbook says they’ll work, but the textbook is proving to be wrong about the restorative powers of low interest rates and fiscal splurges.

‘The pendulum is swinging to the state’

Economists might be slow to grasp this tectonic shift in the way economies are managed, but some investors are not, as an extraordinary Macquarie Bank note explained this week.

It told clients: “… we believe investors are entering a world where the pendulum is swinging rapidly in favour of the state, as a multiplier of demand, provider of capital and setter of prices.

“We also believe that we are entering the age of de-globalisation, as societies demand (and get) greater protection from competition and immigration as well as greater support for local industries and employment.

“This implies that ‘Follow the Government’ and ‘Buy least efficient and most protected’ local stocks could emerge as the key strategy, replacing popular globalisation themes.”

Perhaps that will wake up a few IMF boffins. Because while they offer the same tired solutions to restore growth, investors are reluctantly learning to live with these dismal trends and searching for equally dismal profits.

Make no mistake – putting a government bureaucracy in charge of propping up demand, providing capital and setting prices is not a recipe for economic efficiency.

But that’s not what the Macquarie analysts are arguing. They’re saying those trends are happening whether we like it or not due to big swings to the populist right and left – think Donald Trump in the US, Jeremy Corbyn in the UK or even Pauline Hanson in Australia.

Australia must embrace the fiscal option

Australia can’t simply ignore these challenges. Wage growth has all but stalled, and price inflation has been stuck below the Reserve Bank’s target range of 2 to 3 per cent for 18 months.

Rather than stimulating borrowing and private consumption, rate cuts appear to be simply delaying the day when, as Macquarie Bank says, the state will step in to boost final demand.

Fortunately our starting point is not as bad as it might have been. The austerity budget handed down by the Abbott government in 2014 was an attempt to permanently scale back public spending to bring the budget back to balance without increasing taxes.

Both were supposed to balance out, in the longer term, at the arbitrary level of 23.9 per cent of GDP.

Under the leadership of Malcolm Turnbull, by contrast, some of the harshest spending cuts have been abandoned.

The May budget shows tax receipts rising from 23.9 to 25.1 per cent of GDP over the course of the forward estimates.

And the government will augment that revenue with borrowing, in order to allow expenditure to rise to 25.8 per cent of GDP this fiscal year – only marginally lower than the GFC peak of 26 per cent in 2009-10.

Let’s not kid ourselves. Growing public debt is bad, and making the public sector the ‘multiplier of demand’ is bad too.

But whatever the government says about ‘living within our means’, the numbers underpinning its fiscal plan are a tacit acknowledgment that sagging demand, recession and deflation are far worse.