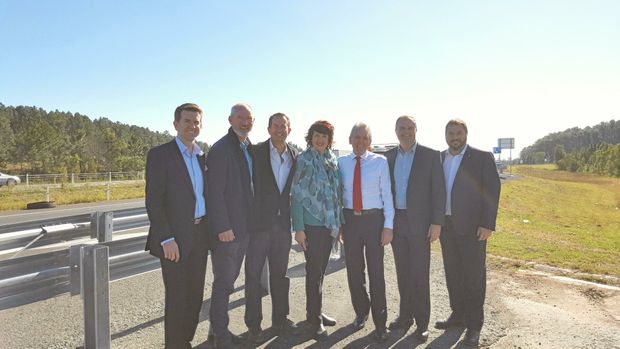 It's A fresh approach that is hoped will reap dividends in the form of major upgrades to the Bruce Hwy.

Sunshine Coast State and Federal MPs have teamed up to extend the hand of collaboration to the Palaszczuk Government.

In a shift from the overtly combative style of the past, Member for Glass House Andrew Powell and newly declared Federal Fisher MP Andrew Wallace have called for bi-partisan cooperation to help improve the state's major transport artery.

Mr Wallace said he wanted to see a State feasibility study on upgrades between Pine Rivers and the Caloundra Rd interchange fast-tracked to enable lobbying to begin in earnest to secure Federal funds for the project.

"We just can't wait until mid-2018 to get this planning study," Mr Wallace said.

He said a completion of the study by April 2017 was needed to enable the Federal Government as an 80% contributor to the upgrades to start assessing and allocating funding for the project.

He said he understood the planning study had gone to tender, been approved and was either starting or about to start and was hopeful it could be sped up.

"All we're simply saying is surely we can compress this (study)... to get this vital piece of infrastructure at least to a point where we can allocate funding to it."

Mr Powell said the current due date of the report of mid-2018 was effectively meaning it would be five-to-10 years before any action was taken.

"We need planning study, business case and funding commitments in the next 12-18 months," he said.

Mr Powell said the Bruce Hwy was currently not working, with many hinterland residents frustrated at the effect its regular congestion- particularly on Sunday afternoons- was having on Steve Irwin Way.

He also said there was a serious need for rail duplication to work alongside an improved Bruce Hwy.

The incoming Caloundra South population was placing added importance on the need to speed up any upgrade of the Bruce Hwy on the southern end of the Coast.

The Bruce Highway planning project between the Pine River and Caloundra Road Interchange is a collaboration - 80 per cent funded by the Federal Government and 20 per cent from the Palaszczuk Government.

If the new LNP federal MPs want changes to the existing agreement between the governments, they need to raise their views with their own Federal Minister.

This joint planning study could have commenced as early as 2012 under the Nicholls/Newman Government, if only the State LNP MPs had used their record majority to improve the Bruce Highway during their three years in power.

In contrast, the Palaszczuk Government will work closely with the Australian Government to progress critical upgrades needed to the Bruce Highway.