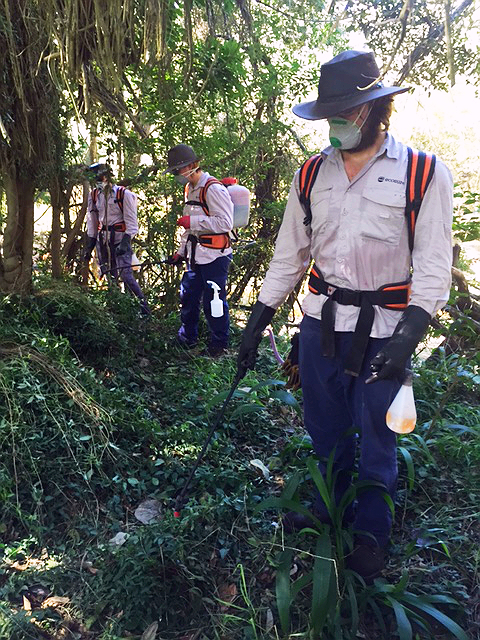 Seqwater is making progress in its fight against Cat’s Claw weed that has been threating native vegetation along the Stanley River, near Woodford.

The bulk water authority, in partnership with the Moreton Bay Regional Council and SEQ Catchments, is targeting the invasive vine, which smothers and kills mature trees that grow alongside the river.

Seqwater Chief Executive Officer Peter Dennis said the roots of the native flora were what held the riverbank together and that the death of the vegetation could lead to significant riverbank erosion and impact water quality.

When the Cat’s Claw weed control project began in 2011, about 21km of the river had already become infested with the weed.

Since then, Seqwater and Moreton Bay Regional Council have together invested more than $700,000 in weed control at Stanley River.

The success of the ongoing project is already evident, with the weed now successfully managed throughout 7 kilometres of the Stanley River.

Mr Dennis said the partnership with Moreton Bay Regional Council and SEQ Catchments had been key to the project’s success.

As a testament to its success, the partnership project was highlighted as a finalist in the annual Healthy Waterways Awards.

“To effectively treat the Cat’s Claw, weed control contractors often require access to land owned by people along the river. Some of those residents have even assisted us further by becoming involved in the post-treatment maintenance of the weed infestations.

“This kind of ongoing support for the program has been invaluable.” Moreton Bay Regional Council Division 12 Councillor Adrian Raedel said since the project’s inception, council had contributed $100,000 each year towards maintenance of the invasive Cat’s Claw weed as part of its commitment towards the ongoing preservation and rehabilitation of local riparian environments.

“Continuing to improve and maintain the health and water quality of our rivers and waterway catchments is vital for the Moreton Bay Region as it continues to grow, and in making sure our region is sustainable for generations to come,” Cr Raedel said.

“The project has already proven a success, treating more than a third of the destructive weed from the 21km stretch of the Stanley River, and demonstrates how the council and Seqwater can continue to work together to preserve the Moreton Bay Region’s natural environment.”

Mr Dennis said Seqwater planned to have initial treatment of the full 21km of the Cat’s Claw vine along the Stanley River by 2021. “We have made real progress in managing this weed problem and are committed to continuing to manage this issue,” Mr Dennis said.

“We have already successfully treated the densest infestations and are at a point now where the weed’s impact on native vegetation in these areas is minimal.”

Now in its 16th year, the Healthy Waterways Awards recognise the outstanding achievements of groups and individuals working to improve the health of South East Queensland’s waterways and catchments.

The Cat’s Claw weed control project was one of three Seqwater projects that received a finalist nomination across the award’s 11 categories.