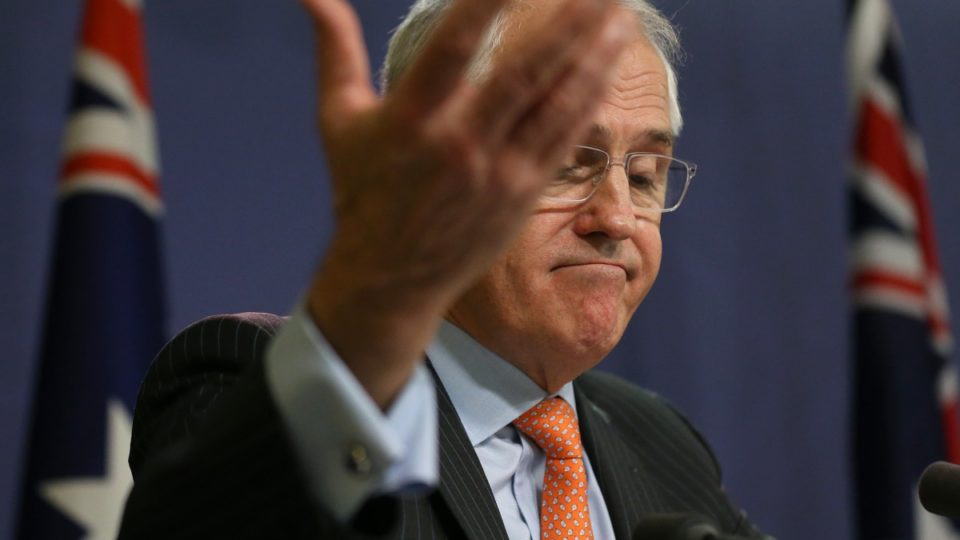 After the new ministry was sworn in on Tuesday, Malcolm Turnbull may have thought he’d gotten away with managing the competing interests within the Coalition.

But no, according to a media report on Friday, the particularly idiosyncratic collection of Queensland MPs known as the Liberal National Party belatedly decided they had not been allocated enough goodies from the cookie jar during the ministerial reshuffle.

The LNP MPs’ reported solution to the apparently graceful rebuff from the PM was to propose leaving the Liberal Party to form a separate party so they could supposedly lay claim to more seats in the ministry.

This is a politically delicate situation – the LNP federal MPs who sit with the Libs get a vote when the Liberal party room elects the leader and so are important to Mr Turnbull.

And Nationals leader Barnaby Joyce depends on the LNP MPs who sit with his party to bolster their numbers in the government as well as claims to the frontbench.

So it’s no surprise the move by the LNP to claim more seats on the ministerial gravy train was quickly nipped in the bud by Mr Joyce and the LNP’s most senior office holder, Senator George Brandis.

Ordinarily, Opposition Leader Bill Shorten would seek to exploit such an outbreak of tensions within the Coalition, perhaps even holding a press conference to denounce the unseemly spectacle of MPs grimly defending their place at the trough while more deserving colleagues miss out.

But the Labor leader remained quiet on the Coalition’s travails.

Unlike the Liberal and National parties, Labor’s factions determine which MPs will be in the ministry.

Having been presented with the list of chosen MPs, it is simply the Labor leader’s task to allocate the portfolios to those honoured by their factions with the sinecure.

But this week the opposition leader had to deal with his own civil revolt. Labor MPs had also been brawling over who was more entitled to the pay boost and title that comes with being a “shadow” minister.

Mr Shorten is, if nothing else, a faction man. While he once wielded the numbers to depose Kevin Rudd and then Julia Gillard, the Labor leader has become deeply dependent on other factional warlords to wrangle the votes.

The man Mr Shorten is most beholden to in this respect is Senator Kim Carr, whose Victorian left faction abandoned him to make room for new talent on the frontbench.

Like Mr Turnbull, Mr Shorten took the path of least resistance in order to protect (the protector of) his numbers, increasing the ministry from the legislated limit of 30 to 32 to make room for Senator Carr.

This means two Labor MPs will be shadow ministers in name only, and will not receive the $40,000 pay rise that normally comes with the title.

One of these MPs is Sam Dastyari, the Miley Cyrus of Australian politics who would probably do his job for nothing as long as it meant keeping his high profile with the media. Senator Dastyari is also a factional powerbroker from the NSW right, so he must have seen strategic value in getting promoted to a phantom ministry.

Then there is Andrew Leigh, a shadow minister in Mr Shorten’s previous frontbench who will now have the pleasure of performing a similar role but with a hefty pay cut.

It goes without saying that Dr Leigh is considerably more credentialed than most of his Labor colleagues, but the former professor of economics is also factionally-unaligned and therefore in no position to complain.

One anonymous Labor source reinforced this point to the media on Friday, saying Dr Leigh should be grateful he was still in the ministry given “he’s only got one vote”.

Coalition and Labor MPs should treat their re-election as the honour that it is, behaving in a way that acknowledges the privilege of serving the voters of Australia.

Instead we’ve been treated to a week of tantrums, grand-standing and horse-trading.

Yet only three weeks after an election at which a record 23 per cent of Australians voted for candidates from non-major parties, the silly political games continue.

This is exactly the type of entitled behaviour that enrages voters and drives us away.