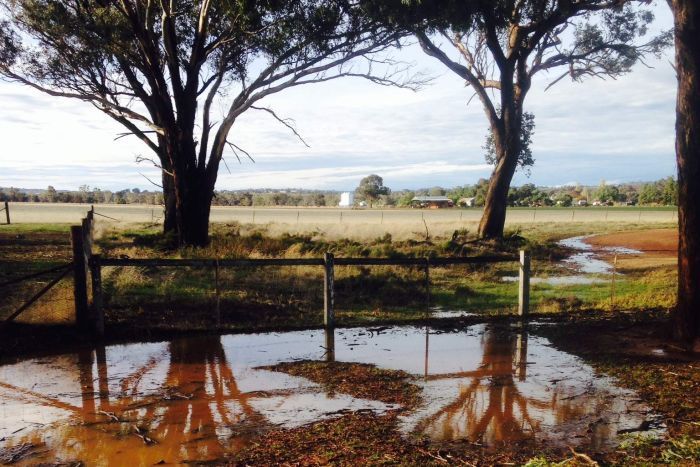 Heavy rain has fallen across inland areas of the eastern states, coming as blessed relief for farmers who have been dealing with the drought-like conditions associated with El Nino weather system.

Bureau of Meteorology predicts above average rainfall for coming months

Recent rains have come at a perfect time for farmers

Many had been hand feeding cattle due to drought-like conditions

A band of cloud stretching across the nation from the north-east of Western Australia, across Queensland and down to the south-eastern states has brought good rain to many areas, heralding the end of the weather pattern.

Farmer and agronomist James Ingrey from Central West NSW said it has been a particularly dry summer across many inland areas of Australia, as the weather pattern associated with lower than average rainfall — El Nino — dominated the nation's climatic conditions.

But the most recent forecasts from the Australian Bureau of Meteorology (BoM) predict El Nino is on its way out and its counterpart, La Nina, may soon arrive, bringing with it higher-than-average rainfall.

Farmers have been advised to expect more wet days and months ahead, and Mr Ingrey said the weekend rains had come at an ideal time.

"I've just been out and about having a look around, all the crop that was sown either dry or in the last week is just starting to show through and it means the rest of the cropping program can continue under very adequate soil moisture conditions," Mr Ingrey said.

He is one of many farmers who took a risk in recent weeks to sow crops and cross their fingers for rain.

"Dry sowing's a risk, you can do it and go a long period of time and have a small shout of rain and potentially damage the seed and when it does rain properly it won't come up," Mr Ingrey said.

"It's critical that once they do dry sow that the first rainfall is an effective one, so that what they've put out does come up."

The other risk is that heavy rain after a period of drought can cause soil damage, or simply run off.

Dry groundcover disintegrates and turns to powder, which can form an impenetrable barrier when the rain does come, causing water to run away quickly instead of soaking into the dry earth below where the moisture is needed.

But Mr Ingrey said the weekend rains, which broke a dry spell that brought the lowest average rainfall across New South Wales since 2013, have been near perfect.

"Except for one short sharp storm we had a Sunday a week ago it has been absolutely 100 per cent ideal," he said.

The dry summer means there has been little for sheep and cattle to eat in the bare paddocks, Mr Ingrey said most farmers have been forced to hitch bins to their utes to haul oats or lug hay bales to hungry mobs of sheep and cattle.

"It's probably been one of the more challenging starts to the season for growers for quite some time," he said.

"Most farmers, virtually 100 per cent of farmers would be hand feeding all stock now."

He said the recent rains have brought immediate relief so while a wet winter is not necessary, it certainly would not go astray.

"We can get through this part of the year, we don't need much rain over the next two to three months but what we do have at present is very little stored subsoil moisture," he said.

"If we did happen to get a wet winter that would be great because it would give us some moisture in the bank, but that critical time is that September-October period so you know if the La Nina was to happen to settle then, they're the critical months from a cropping perspective."

In its latest Climatic Outlook Statement the Bureau said rainfall through May, June and July is more likely to be above average, as the El Nino weather phenomenon subsides and La Nina takes its place.

Photo: Farmers have to hand feed cattle as they wait for much needed rainfall. (ABC News: Nick Grimm)