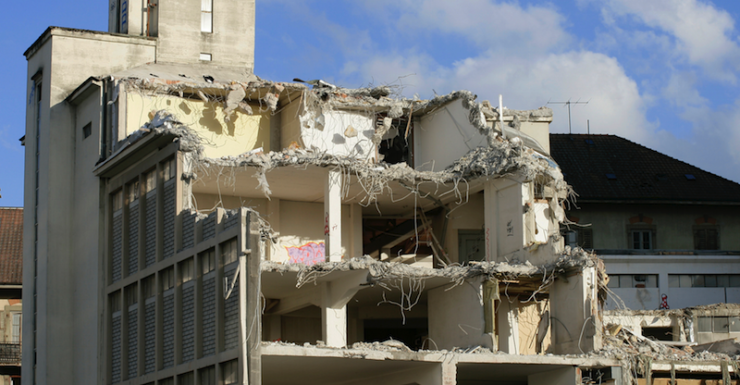 Banks are making big changes to what they can offer housing investors, before the ‘supply glut’ in new apartments arrives.

One of the few journalists in the world to have written about the global financial crisis before it happened, was Australia’s own David Hirst, who died in 2013.

Hirst used his syndicated column ‘Planet Wall Street’ to issue advance warnings of the 2007 sub-prime housing collapse, and the economic devastation that followed.

So when I met the inimitable Mr Hirst back in 2010, my first question was ‘how did you know?’

How had he and his wife known to sell their Arizona home in 2006 for around five times the price it was listed at after the sub-prime meltdown?

His answer was simple. He’d phoned one of his usual real estate contacts and was told “the phone has literally stopped ringing – we’ve never seen this before”.

It was the tremor that set his computer keys clattering, and within a month that same tremor showed up in the bond market, followed by an epic collapse on the world stock markets.

David Hirst’s story is a reminder to all journalists to keep an ear to the ground for tremors, and not to ignore them as most did in 2007.

Well some pretty loud tremors have been felt in Australia this week.

This first came from Macquarie Bank, which identified 50 postcodes, encompassing 100 suburbs, into which it is prepared to lend less money for housing investment.

It cut its maximum loan-to-valuation ratio from 80 per cent to 70 per cent for those postcodes, most of which are in inner-city areas where a record apartment construction boom is creating a large oversupply of dwellings.

In a precarious market such as this, a bank’s calculation is not whether investors Mr and Mrs Smith will lose a chunk of their life savings, but whether they are likely to continue to service their mortgage.

When a loan goes bad – that is, Mr and Mrs Smith default on repayments – the bank only needs to recover 70 per cent of the original value of the property to avoid losing money (give or take administrative costs).

But banks also know that if a property falls below 70 per cent, many investors will neither default, nor sell. That is, they will continue to service the debt from a position of negative equity, hoping to recover what they’ve lost.

Macquarie’s calculation, therefore, contains the implicit warning that the inner-city areas they’ve highlighted could see property prices fall even more than 30 per cent.

That is very far from saying the entire housing market will crash – only that the inner-city apartment market is headed for a downturn, and one made worse by buyers failing to settle on off-the-plan properties that will have to be liquidated at fire sale prices.

One can hear the ghostly keys of David Hirst’s computer clattering from here.

Given Macquarie’s move to de-risk its investor mortgage book, why is Westpac moving the other way?

It has just increased its LVR for property investors from a safe 80 per cent, to a riskier 90 per cent. Hasn’t it heard the rumbles?

Actually, Westpac is in catch-up mode. It is the biggest lender to property investors in Australia, but its has overshot somewhat in its attempt to limit the growth in investor credit to 10 per cent per annum.

That 10 per cent ‘speed limit’, imposed by the Australian Prudential Regulatory Authority, was pursued by the big banks in two ways – by raising cost of money through out-of-cycle rate increases, and by limiting the size of loans through lower LVRs.

Westpac went from a 95 per cent LVR down to a safer 80 per cent in July last year, but has seen growth in investor lending fall too far.

Across the big banks, investor credit growth has fallen to 5.7 per cent year on year, but Westpac’s has actually turned negative. The exact figure is muddied by the reclassification of some loans as owner-occupier but is officially -8.8 per cent.

Increasing LVRs – allowing investors to buy properties with 10 per cent instead of 20 per cent deposits – should help boost that growth rate, at least in the short term.

As the chart shows, overall investor lending has fallen, then flattened since APRA announced its credit-growth speed limit.

Well yes, but owner-occupier growth is likely to be weak in the year ahead too, constrained by wages growth and population growth, both of which are at multi-year lows.

In that context, the Westpac and Macquarie decisions are sending the same message.

Pockets of property price weakness will get a lot worse as the ‘apartment glut’ comes to fruition, and yet banks will be sniffing out every opportunity to grow their mortgage books elsewhere.

Whether those tremors become rumbles, and rumbles become a general property price crash, is something perhaps not even the legendary Mr Hirst would be able to pick right now.