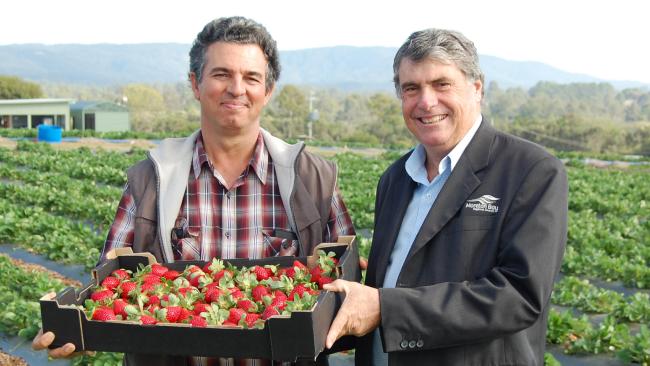 South-East Queensland’s strawberry industry is about to embark one of the biggest recruitment campaigns in its history to secure more than 6,000 seasonal workers.

Mayor Allan Sutherland said he was pleased to be joining industry representatives to launch the “Sweetest Job” campaign at a local strawberry farm in Bellmere, near Caboolture.

Strawberry growers in the Moreton Bay Region and on the Sunshine Coast collectively employ around 6,000 pickers and packers around peak times in August and September.

Information about the job campaign at: www.thesweetestjob.com.au

Moreton Bay region’s strawberry growers have issued an SOS to local workers under the looming threat of a backpacker drought.

Growers and stakeholders this morning launched the “Sweetest Job” campaign in a bid to find 6000 pickers for a crop coming in two weeks ahead of schedule.

Queensland Strawberry Growers Association president Luigi Coco said he feared the industry would not survive if the campaign failed to make up the shortfall of workers.

“In the survey done, 70 per cent said they would not work if the tax went to 32.5 per cent. So with 70 per cent less backpackers, or workers, I’m not sure the industry is going to survive,” he said.

“There’s about five per cent less (backpackers) that have come to the country already.”

Mr Coco said no prior skills were required to pick or pack and indicated growers were happy to be flexible around school hours and study schedules.

“It is hard, don’t get me wrong. But with the trolleys it’s so much easier. Within a week, your body is used to it,” he said.

“I’ve had staff that turn up and have always wanted to build a patio, a barbecue area and have never had one. With the extra income they can do that, or have that holiday they had planned and never could afford and it’s nice to see when that happens.
Moreton Bay Regional Council Mayor Allan Sutherland tests his strawberry picking skills at Taste and See farms, Bellmere. Picture : Chris Higgins

“If they haven’t got a job, they’re better off doing something... and if they’re able to come back the following year, it’s an enormous plus.”

Moreton Bay Mayor Allan Sutherland said it was an opportunity for locals in need of some extra cash to take ownership of the region’s biggest industry.

The Caboolture district makes up 50 per cent of the Queensland strawberry industry.

“6000 jobs can’t be sneezed at. It’s seasonal but if you’re not doing anything and you’re not working, what a way to make some income,” Cr Sutherland said.

“Ten years ago it was locals that came out and helped out and I’d like to see a return to that.

“I just think its a fantastic opportunity for people who are struggling to make ends meet to get a little bit of cash and move on.”

The mayor even jumped in a trolley at Bellmere’s Taste and See farm to test his picking skills.