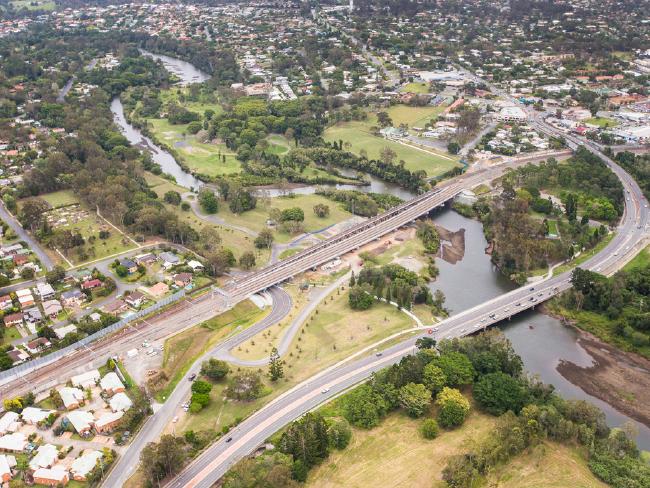 Unsafe Moreton Bay Rail Link 'could be down for six months'

Tens of thousands of Redcliffe and Kippa-Ring commuters hoping to catch a new train to Brisbane in July or August, may now have to wait until Christmas.

Petrie station is the link between the new Moreton Bay Rail Link and the rest of south-east Queensland's rail network.

That means some trains could run red lights, potentially meaning trains could be at a minor risk of a collision, after cost-cutting in 2012.

The Rail, Tram and Bus Union described the situation as "a farce".

"The LNP made a total hash of the MBRL," union president Owen Doogan said.

"They built a system so incompatible with the rest of the rail network it simply can't be opened," he said.

"The LNP ordered a system which just doesn't talk to the rest of the network. It's a farce.

"It's like trying to join old school copper based dial-up internet with superfast fibre based broadband – they are two different things. It never should have happened."

However the LNP's former transport minister Scott Emerson on Monday said he was always told by the Department of Transport and Main Roads and by his director-general Michael Caltabiano that the project was "on track."

"When the contract was awarded by the department, we were assured the project was on track, would be delivered and would be appropriate."

Mr Emerson asked why former transport minister Jackie Trad and Minister Stirling Hinchliffe were confident a month ago and only recently questioned the signalling systems.

After a 100-year wait, commuters were expecting to ride on Greater Brisbane's newest train line before the RNA Exhibition in August 2016.

Transport Minister Stirling Hinchliffe on Monday morning pulled the pin on the opening of the new $1 billion rail line after receiving advice from Queensland Rail – involved for the first time in the three-year project – that the Moreton Bay Rail Link's traffic signal system was not talking with Queensland Rail's signal system.

On Monday afternoon it was revealed that the previous state government ruled Queensland Rail, the state's main rail authority, out of the design and construction phase of the project to find savings.

Rail Back on Track spokesman Robert Dow said it would take a "matter of months" to get the two sets of traffic signals talking to each other.

"But it could be up to six months, but nonetheless, we strongly respect the action taken by Queensland Rail and the Minister (Stirling Hinchliffe) in closing the line indefinitely."

"It's a tough call for them to make because they are going to have to wear some heat about the decision."

Mr Dow said questions should be asked about the signalling system.

Queensland Rail was excluded from the design and construction stages of the project and only became involved in the commissioning of the project.

Mr Dow said Rail Back on Track could not understand why meeting Queensland Rail traffic signalling standards was not a key requisite for the project's contact when it was won by Thiess.

"You would think so, but if there is no-one there to validate that then it is not until they come to the actual commissioning phase and then you realise it is not working," he said.

Mr Dow said Rail Back on Track believed Queensland Rail was involved from the beginning.

Since 2008-09 Queensland Rail has done Caboolture to Beerburrum, the Corinda to Darra track upgrade, the Darra to Richlands railway construction, Richlands to Springfield rail construction and the recently-announced Coomera to Helensvale track upgrade.

Queensland Rail is now in charge of the Moreton Bay Rail Link project.

Transport Minister Stirling Hinchliffe is expected to announce on Tuesday who will run an independent audit of the project to identify why the signalling problem was not identified earlier.