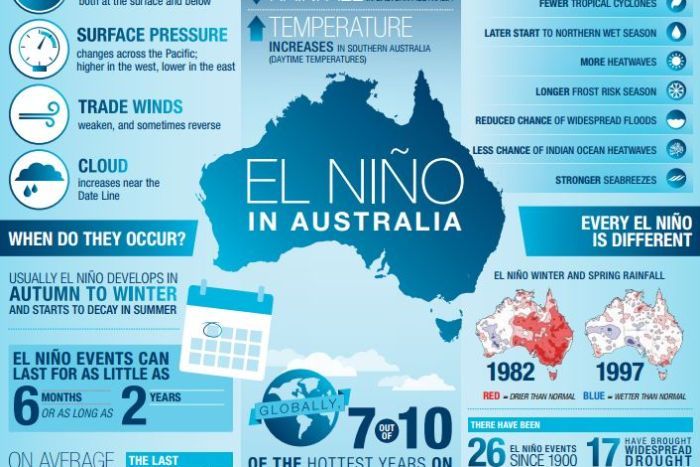 El Nino over, BoM says, so winter rain could be on the way

The latest El Nino cycle is over, which could lead to a wet winter, according to the Bureau of Meteorology (BoM).

The bureau's modelling shows ocean surface temperatures across the tropical Pacific have cooled to neutral levels over the past fortnight.

Waters beneath the surface have also cooled.

Forecaster Michael Knepp said conditions were back to neutral and the bureau was now on La Nina watch.

During La Nina events, rainfall in winter and spring is above average over northern, central and eastern Australia.

"[There's] a greater than 50 per cent chance that we might be in La Nina conditions later in the year," Mr Knepp said.

"That's not a certain thing, just something to keep an eye on over the next few months."

Six of eight models suggest La Nina is likely to form during winter.

Mr Knepp said more rainfall could be expected across the region if predictions were correct, but the outlook accuracy at this time of year was low.

El Nino has contributed to drought conditions over the majority of Queensland. Currently, 85 per cent of Queensland is drought declared.

Queensland grazier Peter Whip said the prolonged drought had been devastating for farmers.

Mr Whip, whose property is south of Longreach, said winter rainfall was better than nothing.

"You either want a lot or none," he said.

"It can actually do more harm than good because if we have got a little bit of dry feed from the summer rain.

"Sometimes with that winter rain, if we get 50 points, it can actually wreck the feed you've got."

The bureau said almost the entire western half of Victoria was experiencing severe rainfall deficiency.

The rainfall deficiency in Tasmania covers much of the state.

Areas of serious to severe deficiency remain through inland Queensland and into northern New South Wales.