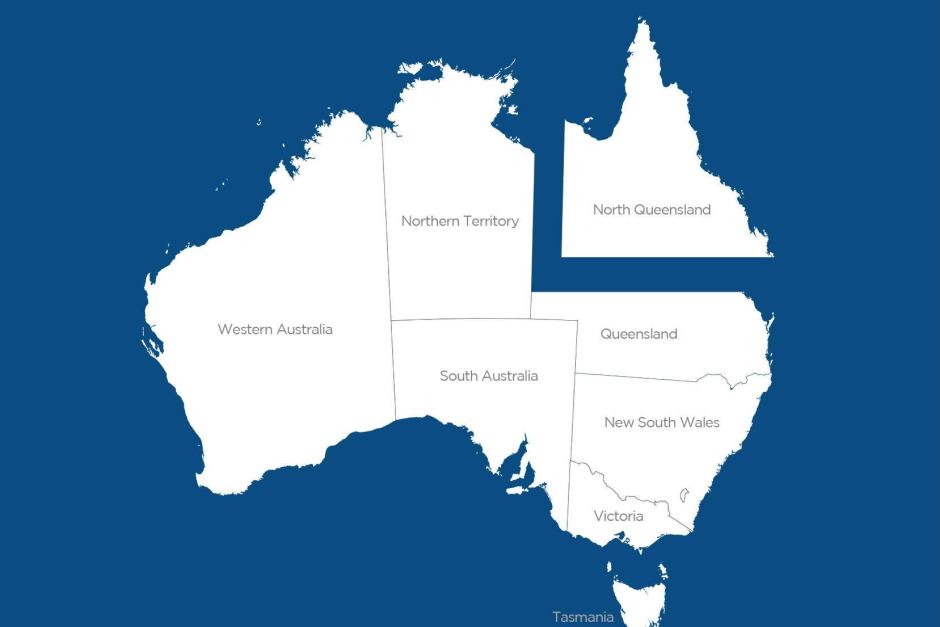 Split Queensland in two or face 'a reckoning across Australia', Katter MP says

There are renewed calls for a dramatic shake-up of Australia's three-tiered system of government, with one state MP saying the country is facing a reckoning.

Katter's Australian Party MP for Mount Isa, Robbie Katter, is one of several parliamentarians pushing for a referendum on the issue of north Queensland breaking away from the rest of the state.

Mr Katter said the split was needed to address what he described as a "sinkhole" of funding to "keep building aquariums in Brisbane and office buildings and to buy votes".

"Queensland's always been agriculture, mining and tourism, you need those things … and a lot of those things exist outside the metropolitan area," he told Lateline.

Mr Katter and many others have told Lateline the problem is nationwide and urgently needs to be addressed.

"This problem transcends just a discussion about a separate state for north Queensland. The problem is the misallocation of resources," Mr Katter said.

"There'll be a reckoning at some point and we're starting to experience that reckoning, I'd say across Australia.

"We are not putting the money where it needs to be and we desperately need resources, our taxes, going to industry-enabling infrastructure, not vote-winning exercises."

More than 6,500 people responded to a Lateline poll on Facebook that asked whether north Queensland should become a separate state.

Fifty-two per cent said no, but many respondents commented that state governments should be done away with all together.

"There should be no states. There's only 20-something million people in Australia. There's more people in London for heaven's sake. State government is a waste of resources, all they do is make more red tape. Give more power to the councils and audit them extremely often."

Professor AJ Brown, from the centre for governance and public policy at Griffith University, told Lateline it was the kind of reform Australia needs.

"One way or another we're going to have to go somewhere in that sort of direction and hopefully the federal reform debates at the moment will actually mature and take us that way some time within the next few years."

"Places like Greater Western Sydney, which has got more people than South Australia in it, suffer from a distance or a remoteness from government and a responsiveness of government for their needs," he said.

Economist Jason Murphy said the idea of reforming federalism was a wonderful theoretical argument, but in the end state governments were well set up.

"The idea that Australia needs another small state without a big city in it I think is crazy because the way the economy is shaping up, it really is those city areas that are producing the high-value industries that the economy depends on," he said.

"Saddling those struggling regional areas with massive bureaucracies is not the way to get them out of this trouble.

"They're better off outsourcing all of that to Brisbane than trying to do it all themselves."