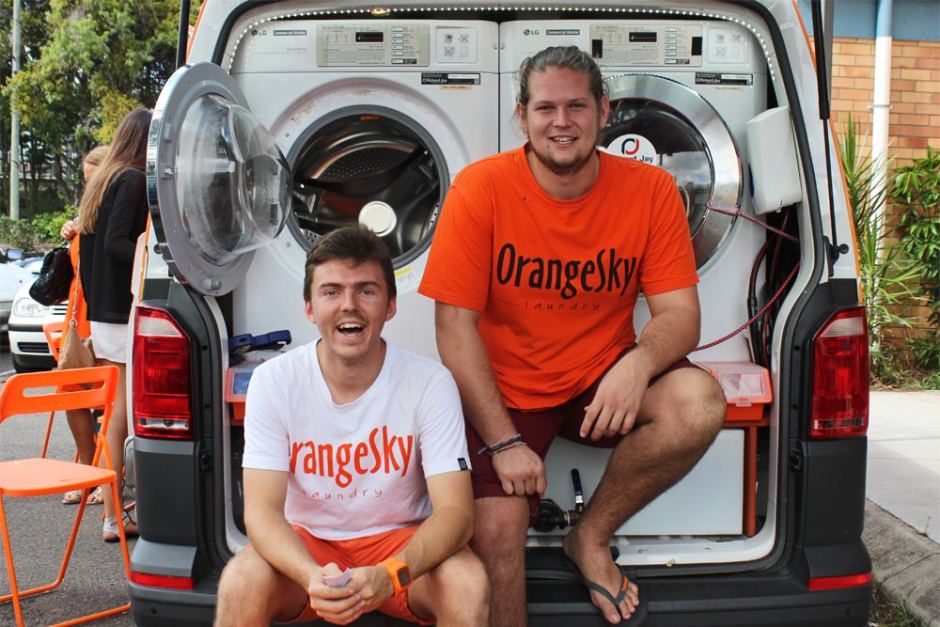 The world's first mobile laundry service is making a splash on the Sunshine Coast, in a bid to help those sleeping rough.

Orange Sky Laundry began in Brisbane in late 2014, and relies on volunteers to help by providing washing machines and dryers to Australia's homeless population.

Young Australians of the Year and co-founders Lucas Patchett and Nicholas Marchesi said the new service marks their eighth Australian van, which will operate four days a week at locations including Nambour, Maroochydore and Caloundra.

Half the time I'd turn up in old baggy clothes covered in dirt from where I was sleeping the night before and I just got turned away. Most of the time they just look at you and say, 'well, you can't afford a house.'

He said there were over 200 homeless people in the Sunshine Coast area, making the laundry service an essential addition to the region.

"It's a massive issue and we really want to restore that basic human right of clean clothes," he said.

Mr Patchett said the idea to start the world's first mobile laundry service came from a longstanding passion to help those without a home.

He said he used to volunteer at food vans and identified a gap in the service industry.

"That mobility of working in the food vans, in the parks, where people are most comfortable is really really important to us, but also finding a value-add to those awesome services and laundry is something that has been overlooked," he said.

"We're able to eliminate diseases, and we're able to restore some respect by not reducing strains on someone's personal resources but on the community as a whole."

Mr Freeman, who now lives in Woombye, said a laundry service was something the Sunshine Coast had previously lacked.

"I always had to lug my laundry to my mum's place, which is generally two or three bus rides away, which is a real hassle," he said.

"But to have something like this, you can just take it to that one central point, have it washed, dried, and off you go again.

"So it would be really helpful because there's not been anything like that on the Sunshine Coast before."

Mr Freeman said clean clothing gave him a confidence boost and encouraged him to seek out contact with others rather than hiding away.

He also said it was vital when seeking a house to rent.

"Half the time I'd turn up in old baggy clothes covered in dirt from where I was sleeping the night before and I just got turned away," he said.

"Most of the time they just look at you and say, 'well, you can't afford a house'."

"The most important things that our vans carry around are not the washing machines or the dryers, it's not the detergent, it's not the volunteers — it's the six orange chairs which foster really positive and genuine conversation," he said.

"That's where our service makes the biggest impact."

Without a regular dinner table, homelessness can be very isolating — a separation Mr Marchesi said the service was changing.

"To date Orange Sky laundry has fostered 25,000 hours of conversation, and not only are our homeless friends' lives improved, but so are our volunteers'," he said.