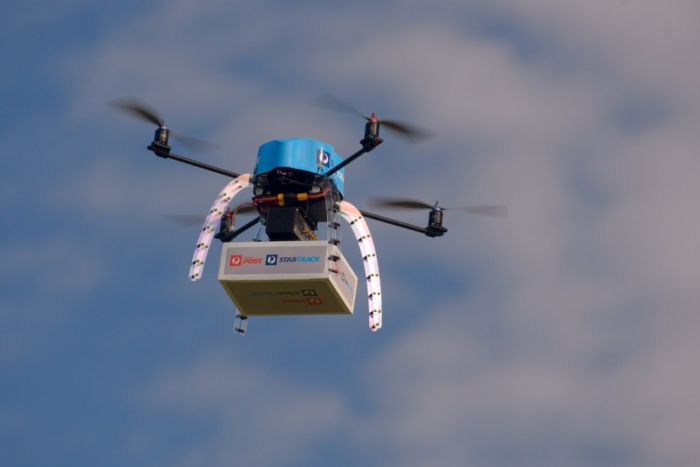 Australia Post's first delivery drone has dropped off its first package in a closed-field trial in Melbourne.

But do not expect it to deliver to your house soon, Australia Post chief executive Ahmed Fahour said, calling the project a "very long-term innovation".

The four-rotored prototype, with a cabled suction device on its base, can hold packages weighing up to 1.2 kilograms.

When hovering above a pre-determined delivery spot, such as a front porch, the aircraft unreels the cable to lower the package.

Once the package touches solid ground, the suction is turned off, the cable is reeled in and the drone flies back to its base.

The trial on Friday took place in a grass field in an Australia Post facility.

But it is hoped that, by the end of 2016, 50 customers in rural Victoria will have packages dropped on their porch twice a week.

A nationwide drone delivery system is still 10 to 20 years away.

'We need to get ahead of the curve'

The project was about complementing, not replacing, the way parcels were delivered, Mr Fahour said.

"Just like vans, trucks and aeroplanes, they didn't replace what we do," he said.

Mr Fahour said the future service would particularly appeal to rural customers whose houses were far from roadside letterboxes.

He stressed Australia Post would seek approval from regulator Civil Aviation Safety Authority for a customer trial only if test flights over the next fortnight proved reliable and safe.

In case of disaster, the drone was equipped with a parachute, lights and a siren.

To protect privacy concerns, customers would need to opt in to receive packages by drone.

Mr Fahour would not say how much the trial — which was not financed through Australia Post's $20 million innovation fund — was costing.

"Right now, this isn't about cheapness or savings," he said.

"This is us saying we need to get ahead of the curve, and that is what innovation is about."