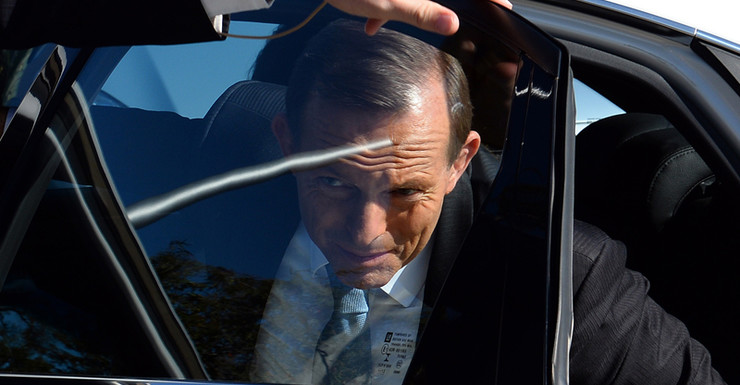 Tony Abbott to campaign outside Warringah

The ex-PM will reportedly tour marginal seats despite no invitation from Malcolm Turnbull.

Former Prime Minister Tony Abbott has confirmed he will launch his own national election campaign of sorts later this year after missing out on a guernsey in Malcolm Turnbull’s official electioneering team.

“My main focus will be campaigning in Warringah but I will also support the election of the Turnbull government by campaigning with my colleagues in marginal seats where I’m asked to do so,” Mr Abbott said.

The ex-PM had already received requests to “deploy” to electorates in New South Wales, Queensland, Victoria, Western Australia and the Northern Territory, according to the report.

A day earlier, Mr Abbott hinted at what could become his key election platform. In an almost 4000-word essay published in Quadrant on Saturday, he again defended the national security achievements of his term in power: “As prime minister, I was determined to advance our interests, protect our citizens and uphold our values around the world.”

In the essay, the former PM congratulated himself for the handling of the MH370 search and boasted of his efforts to strengthen ties with Malaysia, Sri Lanka, Japan and Indonesia – and of his “shirt-front” encounter with Russian president Vladimir Putin over the downing of MH17.

The Opposition seized on the report of Mr Abbott’s own national campaign as further proof of “chaos and division” within the government.

“We see chaos and division at the heart of the Turnbull government. We see Tony Abbott clearly campaigning, something Malcolm Turnbull doesn’t want him to do,” Mr Shorten said during a press conference on Sunday.

“The only way you don’t get Tony Abbott is by voting Labor, because Mr Turnbull can’t stop Tony Abbott.”

Another former Liberal Prime Minister, John Hewson, joined the debate over the weekend by suggesting that Mr Abbott should be given a clear election role.

“He won’t go away, so I think you give him a role. Define the role very carefully and encourage him to be judged by his performance,” Dr Hewson told Sky News.

Mr Abbott had already sparked election controversy, and similar cries of “chaos” from Labor, by claiming earlier in March that the Turnbull government would effectively be campaigning for re-election on his government’s record.

“There are some changes but fundamentally the Turnbull government is seeking election on the record of the Abbott government,” he told Sky News on March 21.

This prompted Prime Minister Turnbull’s office to try to spin this as a positive with a three-word slogan: “continuity and change.” It backfired when a US actress pointed out it sounded very similar to a slogan used in the political satire Veep.

The election is expected to be held in early July as a double dissolution of both houses of parliament, or in September or October as a standard election of the lower house.

Earlier in March, Mr Turnbull shocked the nation by advising the Governor-General to recall both the upper and lower house from holiday in order to consider the ABCC bills. This move was widely interpreted as him goading the Senate to block the bills in order to give him a double dissolution trigger.

Any hope Mr Turnbull had of a scandal-free lead-up to the election was marred last week by claims of fundraising abuse in New South Wales. His cabinet secretary Arthur Sinodinos, then honorary Treasurer and Finance Director of the NSW Liberal Party, has denied knowing that a donation from a property developer to the NSW Liberal party was disguised as a charitable donation.

The gift is one of $693,000 worth of donations being withheld by the electoral commission. The commission has demanded details of the Free Enterprise Foundation slush fund that acted as the middleman between the NSW Liberal party and individual givers. It is illegal in NSW to accept political donations from property developers.