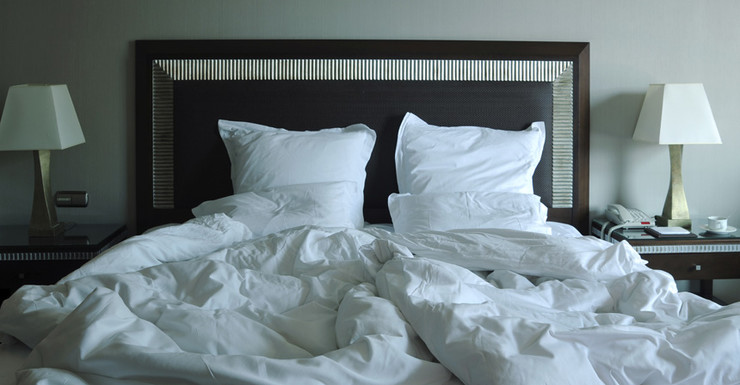 The bloodsucking critters causing havoc in your bed

These little creatures are infesting homes and causing people to suffer rashes.

Tiny little vampires that hide during the day to feast on your blood at night are spreading across Australia.

All over the world bedbugs are multiplying, leaving horrific red rashes, and infesting homes – and not many people know about it.

Pest control experts say the number of bedbug infestations in Australia is rising each year due to the increase in travel. March is peak bedbug season.

“For us there is a seasonal increase from November to March, April which is the height of summer, the height of the tourist numbers in Melbourne.”

Sarah Langtree, 23, knows first-hand how terrible bedbugs can be. She was attacked in Greece while staying at a backpackers lodge during a Contiki tour.

“They decided to bring out the spare bed for me … basically I woke up in the morning and it was pretty severe. I had bites all the way up my arms,” she said.

To Ms Langtree’s surprise, the hotel owners did nothing about it. In fact they said they had no idea what bedbugs were.

They are not just in your bed

Ms Langtree’s story is not that uncommon, with unsuspecting travellers often finding bedbugs in hostels.

However, many people do not know that bedbugs can be found in places other than unclean hostel bedrooms.

Pest management technician Joe Gallagher at Amalgamated Pest Control said bedbugs can be found anywhere where there are lots of people.

“Bedbugs have been found on buses, they’ve been found in planes. When they infest apartments, they can infest the entire apartment if there’s not enough food for them in the bedroom,” Mr Gallagher said.

“They’ve been found in cinemas and any place where there is a high turnover of people.”

What to do if you are attacked

If you are on holiday and wake up to find blood on your sheets and an unbearable itch, the most important thing is not to panic.

Many people have called out pest control technicians for what they believe is a bedbug infestation only to find it was just a hungry mozzie.

The telltale bedbug sign is a rash that is usually on areas of the body above the hips. It looks like mosquito bites but in a line formation.

If you think bedbugs may be attacking you and you need a quick fix, Mr Dixon has a very simple and useful tip: apply insect repellent before sleeping and it should keep those pesky blood-suckers away.

If you think you can avoid a bedbug infestation by staying at a five-star resort, think again.

“Bedbugs do not discriminate. They really don’t care if it’s a hostel or a five-star hotel. They’ll happily live anywhere,” Mr Gallagher said.

He said the key to avoiding bedbugs is to inspect the room before you bring in your luggage and make yourself at home.

Bedbugs typically hide in cracks and crevices in bed heads, bed frames, mattresses and bed bases to remain close to the host. Use a torch to look for blood spots, black faecal matter and adult bedbugs.

These insects cannot fly and have managed to infest dwellings around the world by travelling in people’s luggage.

When returning from a holiday, it is a good idea to leave your bags outside of your home, put your clothes through a hot wash and leave your suitcase in the sun for a few hours.