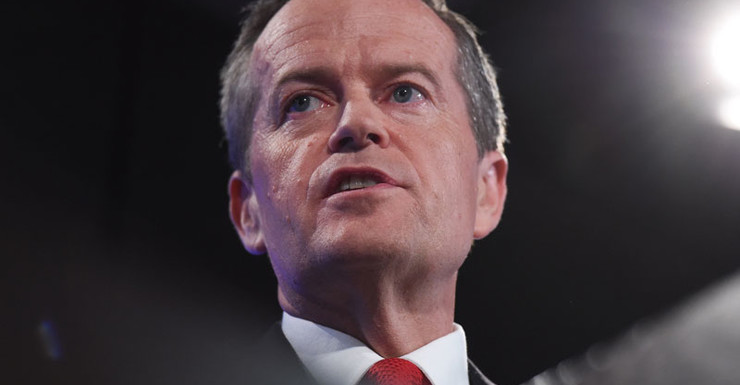 Shorten’s pitch to win over the young … and their parents

Bill Shorten’s National Press Club speech focused on issues that offer hope to young Australians. His big gamble is how older Australia will view his policies.

Opposition Leader Bill Shorten highlighted the crucial role intergenerational issues will play in the upcoming federal election when he spoke at the National Press Club on Tuesday.

Labor’s growing suite of announced policies – Mr Shorten claims there are now 72 costed proposals on the table – pit the interests of young Australia against older generations in a number of key areas.

Mr Shorten’s great gamble is to bet that many voters in the 50-plus demographic will come down on Labor’s side of those issues on their kids’ behalf.

The only ‘new’ news was a commitment to “full employment” – something Mr Shorten outlined in only the vaguest of terms.

He certainly can’t mean zero per cent unemployment, but the pledge to have “every Australian working to their full capacity” should strike a chord with parents of young adults who are working part-time, on casual rates, or out of work altogether.

‘Full employment’ isn’t really a policy at all. All parties strive to get as close to it as possible, but Mr Shorten is essentially saying ‘I know what you’re afraid of, and it’s unemployment or underemployment’.

The fear of being jobless or under-employed inflame another major fear: that young Australians will never own their own homes.

To that end, Mr Shorten again stressed his party’s belief that the reining in of negative gearing on established homes, plus a reduction in the discount applied to capital gains tax, won’t “smash” home prices, as the Coalition has claimed.

This really is at the heart of the growing intergenerational divide – and it his here that Prime Minister Malcolm Turnbull and Treasurer Scott Morrison may have made a political miscalculation.

Their tirades against the Labor policy argue that house prices would fall, and imply that older Australians care more about the on-paper values of their homes than their kids’ ability to buy homes themselves.

Mr Shorten spoke of “breaking the dismal cycle” in which tax breaks have helped prices spiral upwards, well ahead of the wages (and hours worked) of young Australians.

Another issue that resonates more with younger voters is climate change action, and Mr Shorten reminded journalists that “1.3 million homes have roof-top solar” which he sees as Australians “taking control of their power bills”.

Who owns those 1.3 million rooftops? Why those fortunate enough, or old enough, to have gotten into home ownership. There are ways to buy a stake in the solar and battery revolution without owning your own place, but the emotional pull of this technology is strongest when it’s on your own roof.

Labor has been handed a big advantage by the Abbott and Turnbull governments on climate change action and renewable energy – which is why I suspect some kind of policy to further promote roof-top solar or home-storage batteries will accompany Labor’s more hazardous moves back into carbon pricing. We shall see.

Young people, said Mr Shorten, “bear the disproportionate brunt of Coalition attacks”, and he pointed to growing inequality, cuts to education funding and the possibility of a selling off of Medicare as threats in that vein.

These are all concerns meant to tap into the fears of young Australia, but Mr Shorten knows that parents share those fears.

What he did not cover in detail – and what Labor will only start covering in detail when an election is called – is how his aspirations to give young Australians the same opportunities as their parents can be funded.

On jobs, weak business investment means work will not materialise overnight through publicly-funded jobs programs. Even if that were desirable, there’s no money in the budget to fund such measures.

On housing affordability, both the benefits to young would-be homeowners, and the tax revenue boost from changing negative gearing and the CGT, would take years to kick in.

That’s because existing investors would still receive their generous tax breaks as long as they held their properties, and downward pressure on dwelling prices would be small – despite the wild claims to the contrary from the Coalition.

And on climate change, what a Labor government would like to fund or subsidise, and what’s possible, are quite different things.

Mr Shorten’s speech has drawn together the elements of an intergenerational struggle, but is asking generations young and old to agree on the necessary structural change.

That’s a huge gamble, and one that would not have worked just a few years ago. But as the economy turns, and young Australians face an increasingly bleak future, Labor’s timing may prove to be spot-on.