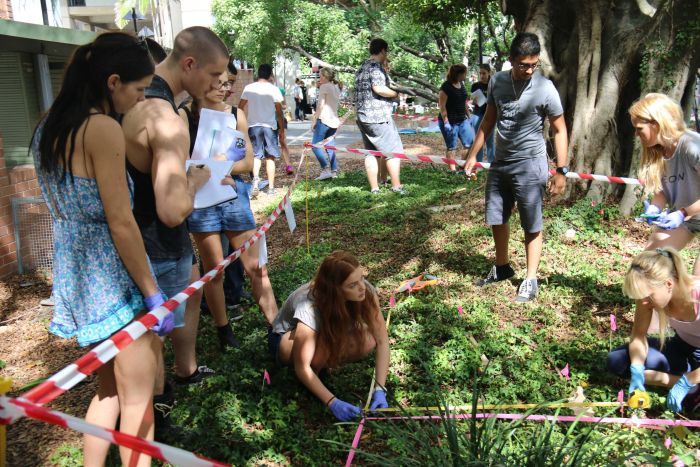 Combing through soil for human remains, conducting post-mortem examinations, and studying blood spatter at crime scenes: it's all in a day's work for the next generation of forensic anthropologists.

Forensic science enrolments in Queensland have increased by nearly 70 per cent in the past four years, according to figures obtained by Queensland Tertiary Admissions Commission.

There have also been rises in criminology enrolments (30 per cent) and for biomedical science (about 35 per cent).

Donna MacGregor, from the School of Biomedical Sciences at Queensland University of Technology (QUT), said forensic anthropologists studied human remains to determine a person's ancestry, age, sex, and stature — in some cases, from just a few bones.

They are one of many professionals who attend crime scenes.

Photo: This generation of students is the first to use new 3D autopsy tables. (ABC News: Josh Bavas)

"Once those remains are found, they'll go to the morgue and therefore you'll have the pathologists, the lab techs there; there's just a large group of people that go into identifying someone."

Ms MacGregor said her students also have to be prepared to diversify.

"Even if some of these students don't go into anthropology, they may end up as medical doctors or other types of witnesses, so we're trying to give them those skills as well," she said.

Student Kirsty Winter said she was inspired to study forensics by crime shows on television.

"When I was much younger I saw my mum watching 'CSI' and I was fascinated that it was science, and then at such a young stage I just grew into this niche and just knew I wanted to do it," she said.

She said she wanted to work at crime scenes and was not squeamish.

"There always has to be someone and I thoroughly enjoy learning about the bones and how this knowledge can transfer into something that can be applied and help people. I'm happy to do it," Ms Winter said.

"We use the hands and the wrists because all of the bones appear at different ages and they usually fuse together at different stages throughout childhood," she said.

"There are standards available at the moment but these are from a very old population.

"Because of socio-economic status and changed in the population from decades ago, we're estimating that development is different now."