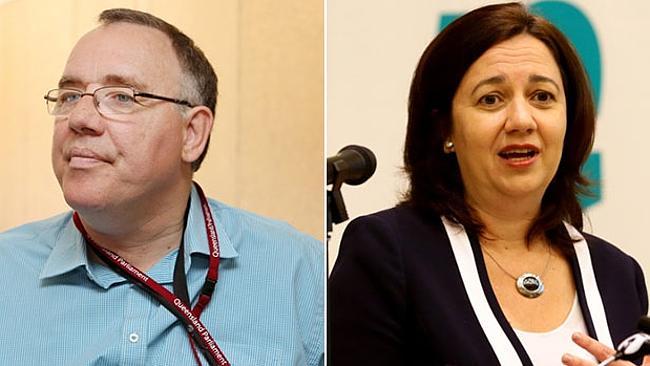 Premier Annastacia Palaszczuk has declared she will not allow Cairns MP Rob Pyne to derail her government following his resignation last night, leaving the door open to an early election.

“I’m not going to rule it out,” Ms Palaszczuk said.

The Premier said she would seek to speak to Mr Pyne today but declared she would not allow anyone “to stand in my way”.
Cairns MP Rob Pyne with Annastacia Palaszczuk before the last state election.

She confirmed he did not tell her about his decision to resign before making it public but defended her government’s handling of his concerns.

“I am not ruling it (an early election) out because I am making it very clear to Queenslanders I am here for them. I am here to govern for them in the best interests of them and I will not anyone stand in my way,” Ms Palaszczuk said this morning.

“I say to all members in parliament here today, I need your support. And if you don’t give me your support, I’ll get the support of the Queensland public.”

Mr Pyne this morning said he better want to be able to represent his “challenging” electorate.

“I want to speak out for those people without fear or favour, not being second-guessed, muzzled or vetted by a political party” Mr Pyne told ABC radio this morning.

Mr Pyne said the “political argy-bargy” of the house left him disheartened.

“I sit in the mid-chamber there and I see the argy-bargy going back and forward - whether it’s Jackie Trad or Jarrod Bleijie - and it’s all about the game for these people,” he said.

“I come back to Cairns and I have a good bath in Dettol and try and clean myself from that process and try and focus on what’s important to the people of Cairns.”

Mr Pyne said nobody could accuse him of failing to address his concerns.

“I certainly did try with numerous letters and emails to ministers,” he said.

“At the end of the day, I want positive outcomes for the Cairns community, and I need to push the government harder on those issues, and I can do that as an independent.”

The Cairns MP said he last spoke with Premier Annastacia Palaszczuk 10 days ago.

But he rejected reports that his decision arose from problems with Ms Palaszczuk’s chief of staff.

“What I would say is I like leaders that lead,” he said.

“I think sometimes I worry that ministers are simply acting on advice every time, and are attending media conferences reading from scripts, whereas I’d love to see some projects certainly in my area pushed through by ministers.”

Ms Palaszczuk has also penned a letter to her caucas repeating her declaration that no MP will get in her way.

“Our Government has a mandate to restore hope and opportunity after three years of threats and cuts under the LNP,” she wrote.

“There’s no more important source of hope and opportunity than a job.

“I made a promise to Queenslanders that I’d lead a Government focused on jobs, and over the last 12 months, 71,700 new jobs have been created in Queensland.

“No Member of Parliament will get between me and creating new jobs.

“Whether it’s with Clive Palmer at Queensland Nickel or for a fair deal from Canberra or for a greater share of foreign investment in new and traditional industries, like mining, agriculture and tourism, our Government will fight for jobs.

“I want the jobs. Queensland needs the jobs. I make no apology for fighting for jobs.

“The LNP will oppose us because they don’t believe in the dignity of work; that’s why they sacked thousands of Queenslanders in Government and oversaw the unemployment rate increasing to 11-year highs during its time in office.

Ms Palaszczuk said she would speak to Mr Pyne today.