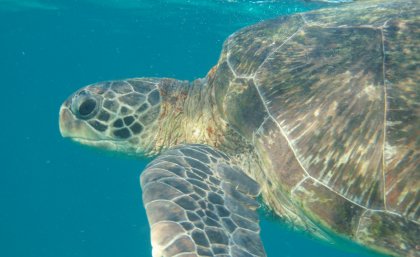 Plastic not so fantastic for marine creatures or our diets

Toxic plastic is wreaking havoc on marine life – and University of Queensland researchers fear it could be making its way up the food chain and ending up on our dinner plates.

UQ School of Biological Sciences’ Dr Qamar Schuyler said studies had found that marine creatures as small as plankton were found to have ingested plastic in the open ocean.

“Unfortunately, what this means is that if the bottom of the food chain is eating plastic it bio accumulates up the food chain and there have been several studies that have looked at food fish – fish that we go out and purchase – and even these fish have plastics in their intestines,” she said.

“The plastic contains toxins and those toxins can leach into the tissues of the fish.

“Scientists are still researching the potential effect these toxins have on the fish, and on the humans who eat them.

“In the past five to six years, the number of marine species that are ingesting or are entangled in plastics has increased from 270 to nearly 700.”

Turtles in Trouble from The University of Queensland on Vimeo.

“From a consumer’s perspective, it’s all about making personal choices and being educated about what needs to be done,” she said.

“For example, say no to straws when you get your smoothie or drink, bring a reusable coffee cup to the cafe, bring a knife and fork in your bag rather than getting the plastic ones and don’t accept single use water bottles.”

It is predicted that by 2050 there will be more plastic in the ocean than fish.

Dr Schuyler’s research, published in PLOS One, has found that 34 per cent of sea turtles in Queensland’s Moreton Bay had ingested marine debris.

“Four to 12 million tonnes of debris enter the oceans every year and 80 per cent of the debris comes from the land. The majority of this debris is plastic – and it takes hundreds of years to breakdown," she said.

“The sea turtles that we’re finding washed up on the shores of Australia are eating or getting tangled in marine debris just off our coast line.

“They eat it as it resembles the food they like to eat. For example, older turtles love to eat jellyfish, so they will go for soft clear translucent plastic bags because of their resemblance to jellyfish.

“These turtles have been on this planet for almost 110 million years, and they’re now in danger of extinction partly because of marine debris.”

Dr Townsend said it was about making choices that will reduce the probability of these animals becoming extinct in our lifetime.

“If you reject a product because of its excessive plastic packaging, this is very powerful and industry will respond,” she said.