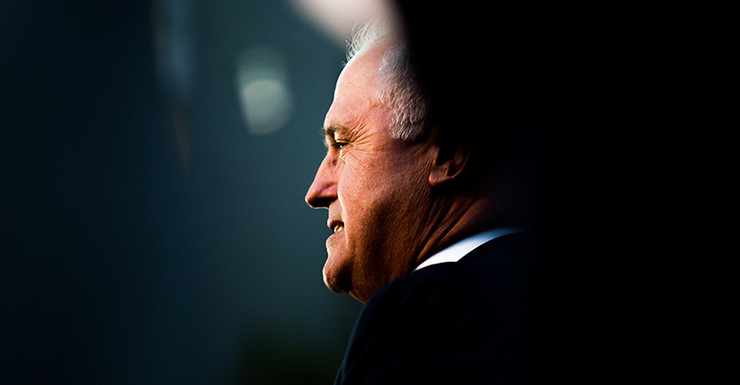 The prime minister is sandwiched between two equally destructive enemies.

Malcolm Turnbull is caught in a pincer movement.

It is increasingly obvious that one arm of the pincer is within his own Liberal party. Unsurprisingly, those dissenters are strengthening the other side of the pincer: the Labor opposition.

At the weekend former PM Tony Abbott buried, if not cremated, any pretence he is here to help the prime minister. He is unashamedly here to help himself.

In a forthcoming essay leaked to The Australian newspaper, he claimed he would have won the next election and was poised to turn the government around when he was struck down.

The defence of his legacy and every detail of the 2014 budget points to someone who is ready to serve again.

It also suggests that he is unaware of just how out of synch with contemporary Australia his brand of conservative politics is.

The danger is that Mr Abbott’s allies in the parliamentary party suffer from the same blinkered vision. They do not see that their attempts to handcuff Malcolm Turnbull to these prescriptions is damaging his – and the government’s – standing in the electorate.

Mr Abbott is privately telling people that Malcolm Turnbull is a dangerous leftie. The tax debate is degenerating into a proxy battle to undermine the prime minister’s authority and standing.

While Malcolm Turnbull wants a thousand flowers to bloom in a new and free wheeling political debate, he certainly doesn’t need Mr Abbott’s allies publicly telling him what he shouldn’t do on negative gearing.

The first-term Canberra senator, Zed Seselja, is a case in point. A firm conservative and Abbott ally he had some of his former Liberal colleagues in the ACT Assembly shaking their heads at his outspokenness.

Deputy Prime Minister Barnaby Joyce sees the dangers. On Friday he warned his colleagues, Liberal and National, that they didn’t want to ventilate on issues in such a way “as the fruits of your endeavours are that you end upon the opposition benches”.

Labor is quick to brand the contradictions and the confusion as chaos and drift.

Malcolm Turnbull is making a virtue of necessity. He says his failure to produce the big bang tax reform flagged five months ago is because he is being “measured” as distinct from Labor’s recklessness.

Never mind that three months was lost while his treasurer played with a 15 per cent GST.

In Question Time on Monday the prime minister avoided any attempt to get him to spell out what he was going to do with negative gearing. He wouldn’t dare go near explaining what Treasurer Morrison might have meant when he said there were “excesses”.

And then there is his predecessor John Howard. Remember how he promised he wouldn’t be like other former prime ministers and would butt out of commentary on his successors?

There was an avalanche of commentary on the weekend. One hour on Sky News, no less. The former prime minister who not only lost an election, but his seat as well, has now become a Liberal icon.

From this lofty position he kindly suggested that the GST may be off the table for now but it would make a reappearance. Labor’s advertising agency will surely grab a clip of that.

Then he too bought into the negative gearing issue, urging caution.

At least Mr Turnbull gets one thing from the failed Abbott project and that is “fairness”. His mates on the right appear not to have a clue.

Makes you wonder how the government plans to fund even modest tax cuts.

The prime minister’s avoidance of any commitments, while at the same time attacking Labor’s planned raising of the capital gains tax, also leaves the economic literati wondering.

We are assured that all will be made clear. Probably in April.