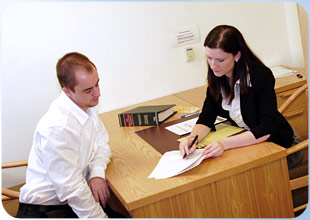 Queensland community legal centres had a 90 per cent increase in clients in the past 12 months, figures show, prompting calls to abandon planned funding cuts.

The Federal Government has flagged a 30 per cent cut over three years from 2017.

The director of the Queensland Association of Independent Legal Services, James Farrell, said the services were shouldering more of the legal load.

Mr Farrell said the services would be forced to turn away vulnerable people, including domestic violence victims, if the cuts went ahead.

"Last year in Queensland, community legal centres helped 50,000 people with legal problems but were forced to turn away another 80,000," he said.

The chair of National Association of Community Legal Services, Rosslyn Monro, said the funding cuts could prompt a legal crisis.

"We're at the 11th hour. We know we're not meeting the needs of women who experience domestic violence. For women experiencing violence that can place them in a dangerous position," she said.

She called on the Federal Government to reverse the cuts and provide an additional $14 million a year to boost services.

"Now is the worst possible time to be cutting funding to services like this. We're calling on the Federal Government to reverse the cuts and increase funding to community legal services so they can help women and children in need," Senator Waters said.

The ABC has contacted the federal Attorney-General's office for comment.