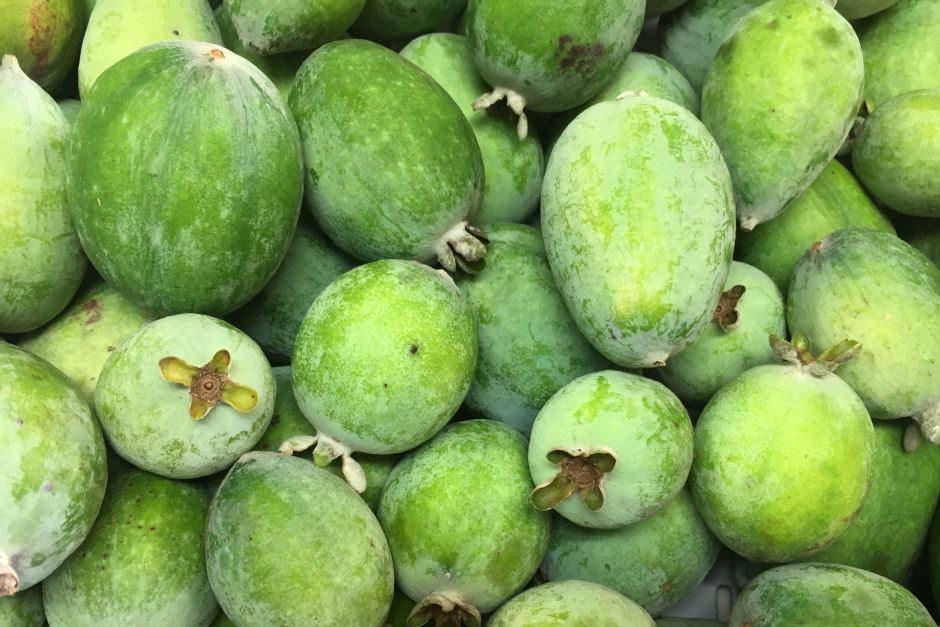 Have you ever heard of a feijoa? What about a feijoa roadie?

Fanatical fans of the South American sub-tropical fruit have travelled hundreds of kilometres to feast on feijoas.

The brief March harvest season was a sell-out for Hinterland Feijoas at Belli Park, on Queensland's Sunshine Coast.

They planted 750 trees and five varieties of the South American sub-tropical fruit, which is commonly grown in New Zealand.

"People travel from all around Australia — quite literally will plan their holidays, come down here from as far away as Townsville [for the harvest]," Ms Hookey said.

"It's called a feijoa roadie, so you pack up the car, book your feijoas, book your apartment ... it's an annual event now," she laughed.

"Now we sell 100 per cent of our crop from our farm gate. In a good year it could be six or seven tonne."

This year's harvest was halved after drought forced the couple to heavily prune back their trees last year.

Photo: Peter Heiniger and Sally Hookey, of Hinterland Feijoas, sell 100 per cent of their crop at the farm gate. (ABC Rural: Jennifer Nichols)

Feijoas are about the size of a kiwi fruit, with a smooth, green waxy-looking skin.

"It's very hard to describe the taste, but the centre is a little bit like strawberry and pineapple mixed and the outside is more like a pear, and the skin is actually a bitter skin, but you can cook with it," Ms Hookey said.

She said the fruit was regarded as a super food, high in vitamin C, potassium, fibre and antioxidants.

Feijoas can be eaten fresh, used in juices, smoothies and ice creams, wines and vodkas, jams, chutneys and savoury dishes.

Hinterland Feijoas has won five Sunshine Coast Excellence in Business Awards and was entered into the awards' hall of fame.

For the past five years, Loma Campbell has taken a feijoa roadie trip from the Gold Coast for her annual fix.

"I've got friends that have already been up here this year. Yeah, we're crazy Kiwis," she laughed.