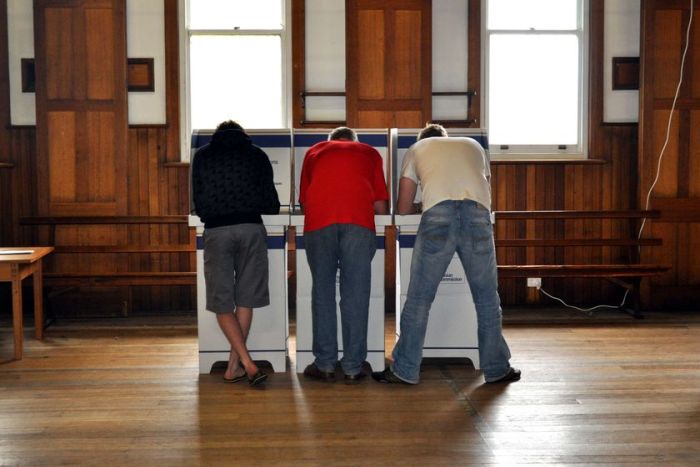 The electronic ballot-scanning pilot launched in five councils during the weekend's local government election in Queensland has left some councillors clueless about their future.

The technology that runs first-past-the-post ballot papers through a scanner, takes a photo, and then recognises the numeral, has caused extensive delays in the Noosa, Mackay, Toowoomba, Livingstone and Gladstone council regions.

Less than 8 per cent of the vote has been counted in Noosa, and less than 4 per cent in Toowoomba, Gladstone and Mackay, while not a single vote has been declared for councillors in Livingstone.

Electoral Commission Queensland (ECQ) assistant commissioner Dermot Tiernan said the delays in Noosa had been caused by sensitivity in the technology.

"What happened on Saturday night is that we started scanning postal votes, and postal votes are always folded up and creased, and we probably set the scanners' sensitivity a bit too specific, so it was reading some of the creases as marks," Mr Tiernan said.

"Once we realised what was going on, we switched to pre-poll votes and the scanning technology worked quite well."

Technology was trialled for six months

The ECQ said the ballot-scanning technology had been developed by a two private sector companies over about six months.

Mr Tiernan said while the technology had been successfully tested on Noosa ballot papers from the 2012 election, other issues on election night — when thousands of election watchers were blocked from accessing the commission's results page — had been the result of dated software.

"The old system was built to run state elections — to run 89 elections — and on Saturday night we had to ask it to run 349 local government elections and 89 little referendum elections on top of that, so the poor thing kept tripping over itself," Mr Tiernan said.

He said delays were also caused by a massive overload of online traffic directed towards the ECQ's website.

"Our firewall provider thought all this internet interest in the ECQ website meant we were being hacked," Mr Tiernan said.

"What was actually happening was that people couldn't get through and they were hitting refresh and that made the situation worse."

Despite the delays, some local government representatives have suggested the move towards electronic ballot voting is a good thing.

Mayor Bill Ludwig, who has been returned to Livingstone Shire Council for a fourth term, said while the delay was annoying, it was a worthwhile time investment.

I think the old manual way of counting was much better as we always get a result on Saturday night.

"It's frustrating for everyone including the councillors and the candidates, but it's a new technology and it was very interesting to watch it in process yesterday," Cr Livingstone said.

Noosa Shire Council mayoral candidate Tony Wellington said he understood the delay could last until the end of the week.

"For the councillors it looks like they'll end up waiting at least a week or so to find out who's in and who's not," he said.

"Obviously there are going to be teething problems with any new systems, however the upside is that rather than looking over the shoulder of the electoral officers while they're counting, the scrutineers actually see contested ballots come up on the screen, and that makes for a much more transparent process."

However, Gladstone Regional Council mayor-elect Matt Burnett is not convinced of the benefits of the trialled system.

"I think the old manual way of counting was much better as we always get a result on Saturday night," he said.

Difficult to get it right first time around

But computational social scientist and University of Queensland lecturer Dr Daniel Angus said while the technology would not necessarily guarantee greater accuracy, it would ensure a faster result once the program had been perfected.

It will speed things up, and it gives you an electronic record as well as the hard copy record of what happened on the day.

"Essentially what they're trying to do is replace human judgement with machine judgement, and when you start talking about scanning these documents in, you're still talking about a system that's been trained to perform a particular task," he said.

"These things are always going to have a particular accuracy within the judgement that they make."

Dr Angus also suggested Queenslanders should forgive the delay in results, because it would be difficult to guarantee a perfect rollout the first time around.

"When you try and roll out a new technology, the potential won't be realised in the first instance, so what I'm hoping here is that they're learnt a lot about the trial — what it can do, what it can't do, and things they need to do to design the technology better."

In spite of the controversial roll-out, Mr Tiernan said the trial did help to identify problems within the system that would be worked on before next time.

"It will speed things up, and it gives you an electronic record as well as the hard copy record of what happened on the day, so if anybody wants to challenge us it's easier to find," he said.

"But can we do it better next time? We're going to have to."