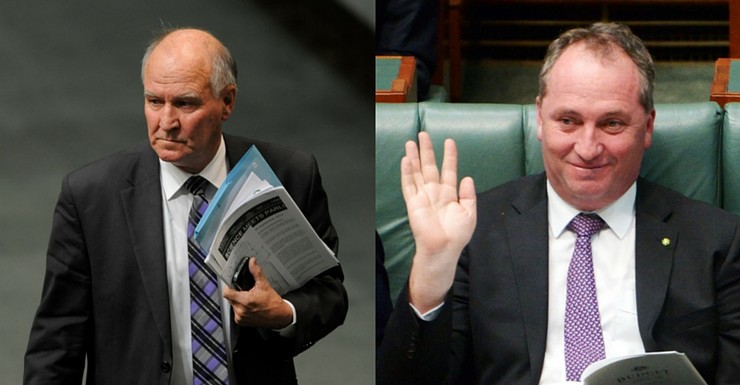 Electorate warns ‘disturbing’ mine could cause Joyce’s downfall

Constituents say Barnaby Joyce has ‘let down’ his electorate and Tony Windsor is set to swoop for the seat.

Residents in Barnaby Joyce’s electorate warn he could lose his seat at the election for doing “absolutely nothing” to stop a $1.2 billion mining project in New England.

The claims came as former independent member for New England, Tony Windsor, was expected to announce on Thursday he would run against Mr Joyce at the upcoming national poll.

A spokesperson for Mr Joyce told The New Daily they did not know if Mr Windsor would announce he was running for parliament on Thursday.

“Mr Windsor is entitled to run for parliament like any other Australian,” the spokesperson said. “Mr Joyce is looking forward to Mr Windsor’s announcement of his intentions on Thursday.”

Mr Hunt attached a series of the “strictest conditions” on the Liverpool Plains mine, however many in the local community remain dismayed that the project received approval.

Constituents were furious with Mr Joyce – the minister for water, agriculture and the then-deputy Nationals leader – who they accused of not doing enough to stop the project.

The New Daily could not reach Mr Windsor for comment on Wednesday.

“It is one of the big issues,” Ms Nankivell told The New Daily. “There is a general feeling of unrest in this electorate that Mr Joyce has not done enough.

“There is a real feeling that he has used this electorate for his own political gains and not delivered any positive things for the electorate.

“This mine has been subjected to many polls that overwhelmingly show that no one wants it, and we know what a fabulous piece of country this is and Mr Joyce has done nothing except make a lot of noise and hot air.”

To be clear, Mr Joyce vehemently opposed the mine. He slammed the project when it was approved.

“I’ve never supported the Shenhua mine,” Mr Joyce said. “I think it is ridiculous that you would have a major mine in the midst of Australia’s best agricultural land.

“I’ve done everything in my power to try and stop the mine. We brought about further investigations; we had an independent expert scientific review.”

‘All talk and no action’

But Ms Nankivell was adamant that Mr Joyce’s words had not been supported by actions on behalf of the New England electorate.

“Becuase Barnaby is a Coalition member you have remember that there is significant mining donations given to them and he is being led around by the nose,” she said.

“It’s very disturbing for this area.”

Mr Windsor previously said it was “absolute madness” for Mr Hunt to approve the mine.

“We’ve got the biggest water system in the Murray Darling basin here, we still don’t understand the connectivity of the underground aquifers,” Mr Windsor said.

“If Barnaby Joyce is concerned about agriculture, how on Earth could he allow something like this to proceed? Joyce has done nothing.”

Mr Hunt stressed the mine had been “subject to 18 of the strictest conditions in Australian history” at the time of its approval.

“The conditions I have imposed include the power to stop work and stop mining if there are any impacts on agricultural water supply, and if this occurs, the mine must immediately provide an alternate water supply to farmers.”

He said the New England community would pay an ongoing toll for the mine’s operation.