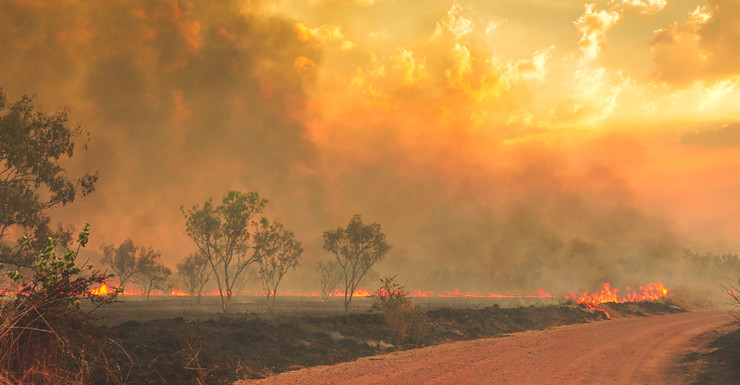 News of a heatwave around Australia to end summer was just the start of it.

Shocking new data from NASA shows the temperature of Earth surged in January and February to the temperature targets set for the year 2100. The planet is now two degrees Celsius above the ‘normal’ mark – the point at which climate change becomes ‘dangerous’ to planet’s inhabitants.

February 2016 was Earth’s hottest February since records began in 1880, according to the US space agency, which Australian experts have described as an “awful” and “dismaying” result that may signal humanity has crossed a crucial tipping point.

The record heat in February broke a new global heat record set in … January. March could be hotter than February.

Over the weekend, NASA reported that the planet’s average surface temperature was 1.35 degrees (Celsius) warmer than the 1951-1980 baseline used by the agency. Writing for Slate, climate journalist Eric Holthaus put that into historical context.

“Keep in mind that it took from the dawn of the industrial age until last October to reach the first 1.0 degree Celsius, and we’ve come as much as an extra 0.4 degrees further in just the last five months,” Holthaus wrote.

Gavin Schmidt is a climatologist at NASA who works in the division which maintains the agency’s temperature records. He put it even more simply: ‘Wow!’ he tweeted.

The planet is currently in the grip of an extreme cyclical weather pattern known as El Nino, so hot temperatures are to be expected.

But the result shocked climate scientists because it went far beyond even the most powerful El Ninos on record.

The best comparison is the ‘super’ El Nino of 1998, which several experts told The New Daily was as powerful as this year’s weather event. February of that year was 0.88 degrees warmer than the baseline – a massive 0.47 degrees below last month’s increase.

“Laid on top of that is this enormous burden of pollution that humans have been putting into the atmosphere for decades and that is supercharging these natural cycles and bringing about these very, very worrying conditions,” Professor Flannery said.

The February result followed the temperature trend. January 2016 broke all January records since 1880, and March looks likely to do the same, even with cyclical patterns subtracted.

Professor Will Steffen, a councilman at The Climate Council, agreed the “huge” difference between the El Ninos of 1998 and 2016 was directly attributable to human greenhouse gas pollution.

“This is a very, very big anomaly,” he said. “There’s just no doubt that there’s a very strong underlying climate change signal and what we’re seeing now, obviously it’s exacerbated by El Nino.

“But if it was only El Nino you wouldn’t see anything near the record temperatures we’re seeing now.”

Three climate scientists told The New Daily that the most worrying implication of February’s record-breaking warmth, as evidence of a long-term trend, was for the Arctic, home to indigenous peoples, polar bears and ever-shrinking sea ice.

Based on this data, The Climate Council’s Professor Steffen predicted that the planet may have already crossed a “tipping point” in Arctic melting that will irreversibly warm the planet through “reinforcing feedbacks”, no matter what humanity does to reduce greenhouse gas emissions.

“There is debate as to whether we’ve crossed that tipping point. My guess is that if we haven’t crossed it, we’re extremely close.”

What this means for Australia and other nations

Several experts noted that the record-breaking warming trend is already evidenced in Australia by heatwaves, droughts and bushfires.

This was supported by the Bureau of Meteorology, which recently reported a prolonged heatwave across much of the nation in late February and the first half of March.

Over this period, Sydney surpassed its long-term temperature record by a factor of two, which University of New South Wales climate expert Professor Andy Pitman described as “gobsmackingly amazing”.

An implication of the trend, according to Professor Pitman and others, was that the goal adopted by 195 nations at the Paris climate conference of no warming above 1.5 degrees was unachievable.

Another expert said the result meant that political leaders must extricate their economies from greenhouse gases extremely quickly, and that Australia must not develop any new fossil fuel sources.