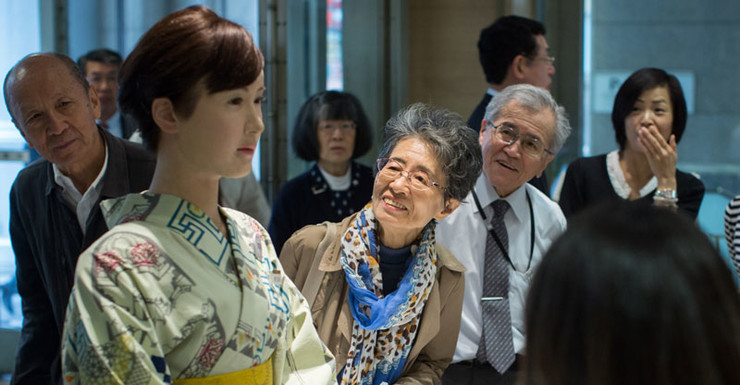 Whether we like it or not, there are plenty of jobs a robot could be doing in the next 20 years.

Robots will “absolutely” become more prominent in parts of our everyday lives, experts said after the federal government released a report that stated nearly half of all Australian jobs were at risk of automation.

The CSIRO and the Australian Computer Society report looked at trends for Australia’s future workforce and said jobs with tasks which are “routine, repetitive, structured and rules-based” were “likely” to become automated.

They predicted about 44 per cent of Australian jobs were at risk of computerisation and automation in the next 20 years.

Customer service, aged care and medicine were just a few industries that would be transformed by automation over the next few decades, although Australia could prove to be more resistant than some other countries.

“Australia is a really progressive country in many ways in science and technology … but there are ways we are quite conservative too.

But some industries are more susceptible than others. We asked the experts which industries could be vulnerable to automation.

A brain biopsy in 1985 was the first time a robot was employed in surgery and since then they have become more prolific, particularly in complex operations.

Queensland University of Technology robotics professor Jonathan Roberts told The New Daily there was a “real possibility” their use in surgery would spread.

Robotically-assisted surgery would decrease the cost and reduce the training time for surgeons, while also extending their working life and the quality of care for patients.

This could eventually see robots – rather than humans – take responsibility for putting you under the knife.

“New technology will be one of the drivers that will change this traditional method of delivery. We can see that one day, each of the stages of care through the hospital could be largely achieved by a computer, machine or robot,” he wrote in an article co-authored for The Conversation.

In Japan, machines already play a key role in the aged care industry, taking up jobs humans have rejected.

“They pick the person up, take them to do whatever needs to be done and then take them back,” Dr Tuffley said.

“But how you actually get the patient to be comfortable with that, that is another thing … eventually, absolutely [we will see them in Australia].”

Transfer care, mobility assistance, dementia care and continence care were some areas that could be automated.

A robot has already begun work in one Tokyo store, but it is likely you wouldn’t immediately recognise it.

Japanese tech company Toshiba developed life-like android Aiko Chihira in 2015. See the video below for a taste of the futuristic in-store experience.

On the other end of the scale, self-service machines are beginning to take over from the traditional sales assistant.

“It will make the process cheaper,” Dr Tuffley said, adding that its use would likely be customer-driven and depend on whether people felt comfortable entrusting their personal information – and experience – to a machine.

Robots already played a key role in manufacturing, particularly in the car industry.

But despite concern they were taking over, “they won’t necessarily become totally automated and let humans go entirely”.

“There is a fairly moderate to high risk that many manufacturing sectors will be affected by increased automation,” Dr Tuffley said.

“The ones that are least likely will be the ones that call for craftmanship … [for example] some cars will always be made by people, but at the mass end I think they will go to automation.”

Google is among the companies currently looking into self-driving technology. Although it has had some hiccups along the way – like a recent minor collision with a bus – it could become more common to see a car rolling by without someone behind the wheel.

“There really is no technological reason that we couldn’t have a driverless car now, but they have sussed it out and in Australia we are not quite ready to swallow this,” Dr Tuffley said.

“There is already a lot of assistive technology in cars, and they continue to ramp that up … it has sort of come in by stealth and I think that is how they will get people to accept it.”