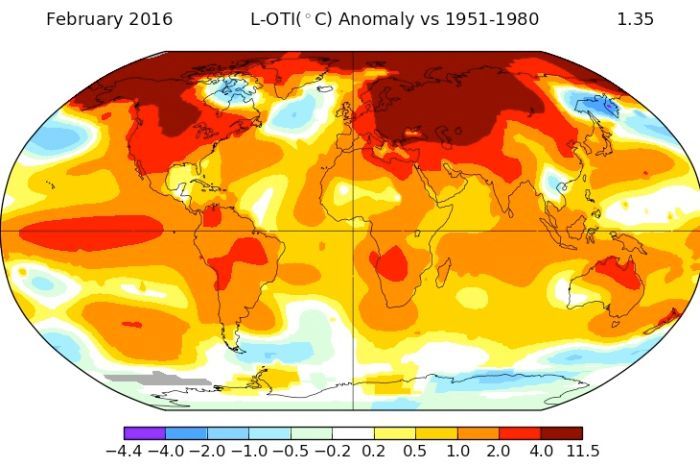 Last year "shattered" temperature records according to the state of the climate report released by the World Meteorological Organisation overnight in Switzerland.

A stronger-than-usual El Nino weather pattern pushed temperatures into uncharted territory all over the world, with climate change feeding the El Nino.

The dramatic temperature rise was foreshadowed by a preview report in November, but the final figures show an even higher leap than forecast.

The report is one of several from science agencies across the world that have been released in recent months describing the alarming extent of global warming.

The increase in temperatures is largely a result of human activity releasing greenhouse gases into the atmosphere that trap heat from the Sun here on Earth.

In December last year world leaders met in Paris and agreed to a new treaty to limit the release of climate changing greenhouse gases.

The treaty will be open for ratification in April.

"Today the Earth is already 1°C hotter than at the start of the twentieth century. We are halfway to the critical 2°C threshold. National climate change plans adopted so far may not be enough to avoid a temperature rise of 3°C, but we can avert the worst-case scenarios with urgent and far-reaching measures to cut carbon dioxide emissions," WMO Secretary-General Petteri Taalas said.

"Our planet is sending a powerful message to world leaders to sign and implement the Paris Agreement on climate change and cut greenhouse gases now before we pass the point of no return," he said.

However the world does not warm evenly.

South America and Asia had their hottest years on record, the USA, Africa and Europe had their second-warmest years.

While Australia had a comparatively mild year notching up only a top five result.

Climate change and El Nino have a complicated relationship, with each feeding the other.

But the WMO said in 2015 climate change made the El Nino the strongest ever.

In addition to the sweaty temperatures, the strong El Nino meant little rainfall for eastern and southern Australia.

El Nino also promotes cyclones in the north west Pacific, which did experience an above-average year for typhoons.

Photo: An image of the ozone hole from the OMI satellite for 6 October, 2015. (CSIRO)

Although the world acted to phase out gases which damage the ozone layer in 1987, they linger in the atmosphere for decades.

Weather conditions in the upper atmosphere can make the hole bigger or smaller and 2015 was a huge one.

It arrived late, starting only in August, and NASA's records showed it was the biggest ever.

It was also long lasting, persisting into December, when it usually closes over by the end of November.

The Arctic and the Antarctic behave very differently.

While the Antarctic ice was relatively abundant in 2015, the Arctic failed to live up to its frosty reputation - at one point registering above freezing temperatures near the north pole in the middle of winter.

Climate change is driven by greenhouse gases, many of which are released in large quantities by humans.

The two most important ones are carbon dioxide (CO2) and methane (CH4). Both of these greenhouse gases set new records in 2015.

Carbon dioxide reached an average of 397 molecules for every million molecules of atmosphere (ppm). The average increase in CO2 is usually 1.5ppm. But in 2015 it was more than double that at 3ppm.

Methane also smashed through a new ceiling, hitting 1833 molecules for every billion molecules of atmosphere (ppb). That is 254 per cent higher than pre-industrial levels.