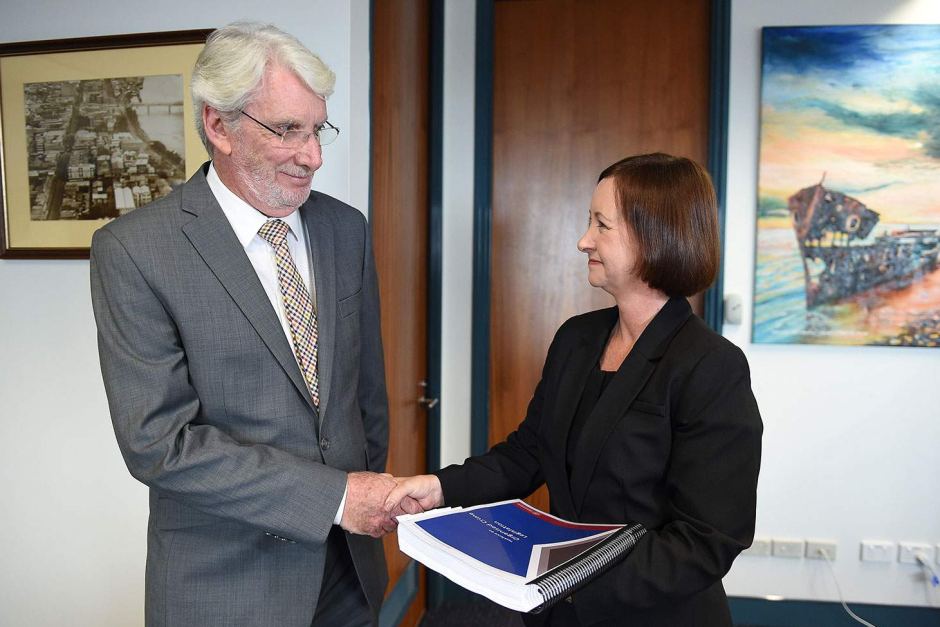 The Queensland Government has received an independent review into the controversial anti-bikie laws, but is yet to publicly announce how it may amend the legislation.

Retired Justice Alan Wilson delivered the report on Thursday after being tasked in June with reviewing what are the nation's toughest anti-bikie laws.

The State Government said it would not announce its final decision before it went before a cabinet meeting on Monday.

On Thursday, it was revealed the head of the Crime and Corruption Commission (CCC) Alan MacSporran wrote to the review taskforce in December warning outlaw bikie-gangs were poised to regroup.

"Several OMCGs have sought to establish or re-establish a presence on the Gold Coast, after their influence waned in the wake of the 2013 'crackdown'," he wrote in a letter released under Right to Information.

"In recent times, the most prominent groups seeking to obtain a foothold are the Hells Angels, Finks, Bandidos and Nomads."

Opposition MP Jarrod Bleijie, who was instrumental in the introduction of the Vicious Lawless Association Disestablishment Act (VLAD) when he was Queensland attorney-general in 2013, said any move to water down the VLAD laws would be disastrous.

"This should send shivers down the spines of every police officer in Queensland, who as a community and society, [are[ sent out to protect the citizens of Queensland and [are] put on the front line to deal with these issues," he said.

"You've now got the two major law enforcement agencies in Queensland - the Queensland Police Service and the Crime and Corruption Commission - warning the Government that if they weaken these laws, Queensland will be less safe than it is today."

South Australia adopted similar laws to Queensland last year, although some aspects were not as extreme.

"We found those laws so far to be very successful and that's evidenced by the lack of activity that we're seeing around outlaw motorcycle gang members in our public places," he said.

"We see that the level of safety in our community has improved as a result of the inability of these members to associate or congregate or exert their influence by wearing their club colours or paraphernalia."

"It's made it much more difficult for them to associate, have a shared meeting place and take advantage of the strength they have behind the club."