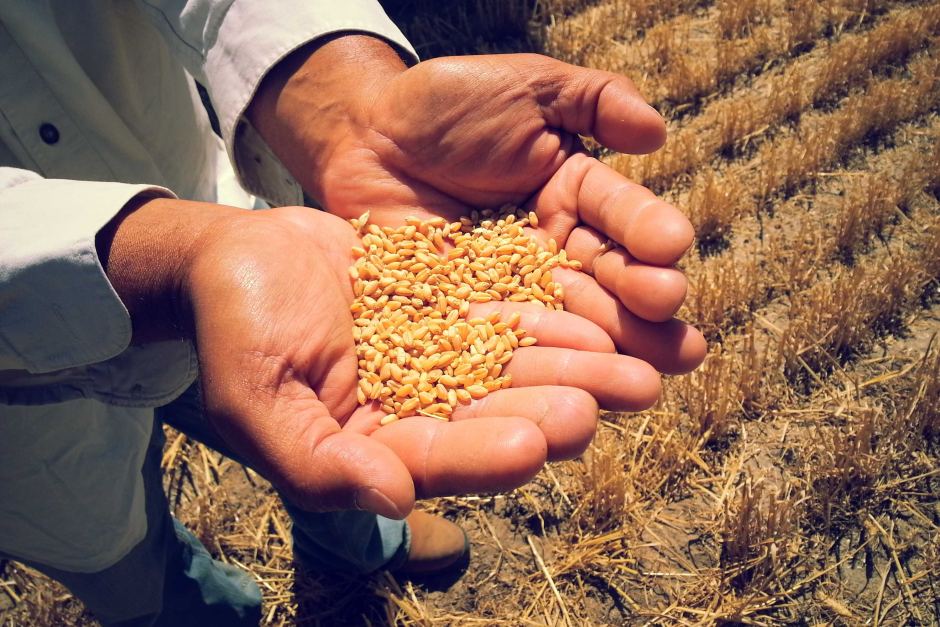 A Queensland research team says traits from ancient wheat could be the key to making modern varieties resistant to pests and drought.

Dr Lee Hickey and PhD candidate Adnan Riaz, from the Queensland Alliance for Agriculture and Food Innovation, have completed the world's first genome-wide analysis of a collection of wheat seeds stored in Russia for more than a century.

The seeds, collected by Russian scientist Nikolai Vavilov, have been kept in a seed bank in St Petersburg since the 1900s.

"He travelled the world collecting more seeds, tubers and fruit than any person in history," Dr Hickey said.

"He brought them all back and stored them in a seed bank in Leningrad, now called St Petersburg, to preserve that genetic diversity for future generations."

Despite tumultuous events, like the Siege of Leningrad during World War Two, the seeds survived.

"Workers at the seed bank protected these seeds with their own lives essentially," Dr Hickey said.

"The Germans had the city surrounded and approximately 1.5 million people lost their lives due to starvation.

"Of course in the seed bank there were lots of tubers and seeds and the workers refused to eat them; and in fact several workers died of starvation protecting them."

That sacrifice meant the seeds were available for Dr Hickey and Mr Riaz to analyse.

"Modern plant breeding over the last 100 years has focussed on selection for the above-ground characteristics, so we're making all the wheat varieties shorter and more adapted to the way we grow wheat today with modern machinery.

"These old wheats went through a huge funnel of selection and while we selected for many attributes that made them more productive, we also threw away lots of diversity for disease resistance and other attributes that we would like in modern wheats today like drought tolerance for instance."

He found a massive array of genes that were absent in modern Australian wheat cultivars.

"The ancient genes could offer valuable sources of disease resistance or drought tolerance," he said.

Now that the diverse wheats have been characterised, Dr Hickey said the next phase would include breeding to re-establish desirable traits.

"That's the idea, however traditional breeding approaches are very slow to do this so it takes many many years, up to 20 years depending on how many breeding cycles are needed, to introduce those new genes," he said.

He said the team would use 'speed breeding' developed at the University of Queensland, to potentially cut that timeframe in half.

No rest for the wheat

"We grow the wheat plants under constant light so they don't get any rest or any time to sleep; so they grow constantly," Dr Hickey said.

"We get up to six generations of wheat per year.

"So this really accelerates the process of which we can transfer these ancient genes.

"We're starting to make crosses now that we've discovered some of these ancient wheats carry very good disease resistance and desirable root traits but we're still talking six to 10 years, even with the latest technology.

"So it still takes time to identify the elite wheats among the pack."

Dr Hickey has offered the research community open-access to his data in a bid to encourage more researchers to take advantage of the seed bank.

"Largely the accessions that we have currently stored in our seed banks are not being utilised by researchers and breeders," he said.

"So we really hope to empower scientists and breeders to to rediscover this genetic diversity and make it more useable.

"It costs money to genotype these ancient wheats and so we are giving them access to the DNA marker information along with the pure seed so anyone in the world can essentially take this collection and mine useful traits from it and use it for their purpose."

The research, 'Into the vault of the Vavilov wheats: old diversity for new alleles', is published in Genetic Resources and Crop Evolution