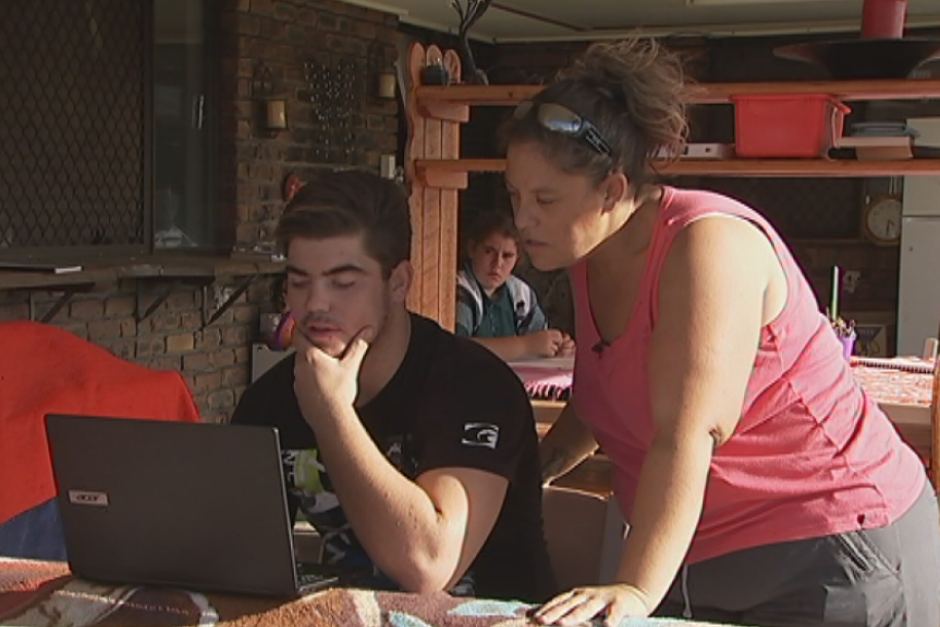 Australia has one of the highest internet access rates in the world, but there are concerns children from disadvantaged backgrounds are being left behind in the digital revolution.

While 83 per cent of the nation's population has a home internet connection, that figure hides the extent of the digital divide, with a third of homes offline in disadvantaged communities.

Internet access is an unaffordable luxury for Jean Davis, who lives with her eight children at Logan, south of Brisbane.

She said this put them at a disadvantage as an increasing amount of her children's school work was done online.

"It's very detrimental, actually, because it's just taken for granted that every family, every household has the internet access and not every household, every child does," she said.

If it's a choice of food or the internet then obviously food's going to win.

"Just with the cost and with the affordability, it's not in our budget to have that at the moment."

He is preparing to study teaching at university, where he will face the same challenges.

"It definitely makes things difficult. It'd be much more convenient to have wi-fi or internet broadband at home," he said.

"That way I don't have to constantly go back and forth between the library and home."

Thousands of Australian families are in a similar position, according to Smith Family CEO Lisa O'Brien.

"If one in three kids in our poorest communities do not have access to essential tools for learning, the implications for that are obviously significant for that family and that child, but it's significant for us as a nation," she said.

The Smith Family has been trying to bridge the gap by providing tech packs including refurbished computers and a year's internet access to kids in need but they cannot keep up with demand.

Students should not be disadvantaged because their families are not able to provide access to the internet or a computer.

"We need a whole of system change here if we're going to address this issue of a digital divide we really need to be thinking on a large scale," Ms O'Brien said.

Dr Scott Ewing, a digital expert with Melbourne's Swinburne Institute, said the isolation of people without internet access has been exacerbated as connectivity has grown in Australia.

"If it's a choice of food or the internet then obviously food's going to win," Dr Ewing, an expert on the digital divide," he said.

Queensland Teachers Union president Kevin Bates agreed it was a critical issue when so much of the curriculum was online.

"In the broadest sense, students should not be disadvantaged because their families are not able to provide access to the internet or a computer," he said.

The Federal Government said it was addressing the divide with spending to ensure more digital technology in schools.