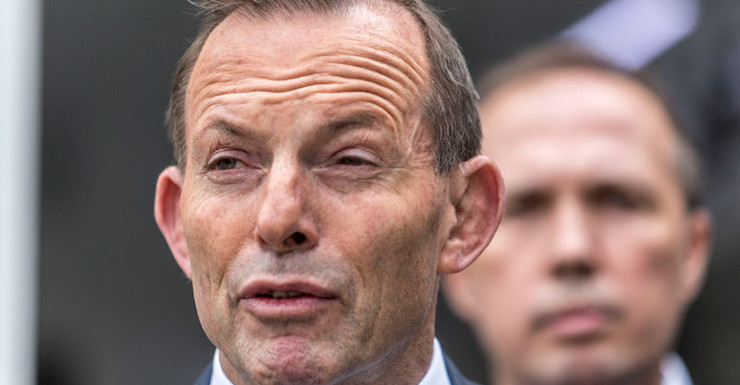 Plus Turnbull’s ‘hymn sheet’ leaked to media and the Border Force’s awkward confession.

Former Prime Minister Tony Abbott famously tore down the Gillard-Rudd Government over its carbon tax, and replaced Malcolm Turnbull as Liberal leader over another type of tax on carbon, an emissions trading scheme.

Is it possible Mr Abbott, reportedly very cranky about being returned to the backbench by Mr Turnbull, thinks he can use concern over a different tax to pull down another prime minister? Is he aiming for a tax trifecta by trying to bring down Mr Turnbull over the goods and services tax?

The Government’s backbench was clearly unsettled this week, the first parliamentary session of the year, by a Newspoll that found a majority of voters is opposed to an increase in the GST even if accompanied by tax cuts and compensation.

Most reports of the threatened backbench revolt focused on two underlying causes – MPs from the right who are opposed to the money raised from the hypothetical GST rise being spent on government services and compensation, and those in marginal seats who fear losing their sinecures in a voter backlash against the tax increase at the upcoming election.

An anonymous source dubbed this latter group the “bedwetters”, a term Treasurer Scott Morrison has publicly used at least twice in the past.

The conservatives strike back

Upping the ante, arch-conservative Liberal Cory Bernardi threatened to cross the floor in the Parliament to oppose any increase to the tax, while other supporters of Mr Abbott, Natasha Griggs and Andrew Nickolic, publicly expressed their own concerns about the prospect of an increase to the GST.

Considered in isolation, these backbench grumbles could be seen as little more than that – right wing ideologues and nervous nellies disgruntled at a political debate that’s not going their way.

But two other developments this week suggest there is more to the discontent than first meets the eye.

PM Turnbull awoke on Tuesday morning to find the daily talking points, which are distributed from the PM’s office to keep all MPs “on song”, had been leaked to the media.

While there was nothing damaging contained in the hymn sheet, the fact that it had been leaked at all suggested the Abbott camp had indulged in a bit of tit-for-tat guerrilla warfare. Much more damaging talking points, prepared by PM Abbott’s office to deny patently obvious fighting within the Cabinet at the time, had been leaked two days in a row to undermine the then Prime Minister.

And then one media organisation published photos of former PM Abbott having what appeared to be an intense conversation with Russell Broadbent, a Turnbull loyalist who also happens be opposed to the GST increase.

Mr Broadbent stated this week that “You’d have to have a very good argument to raise the tax by 50 per cent,” and that “that argument hasn’t been put to me yet”.

When asked about the anonymous “bedwetter” comment, the backbencher replied that it was “a disgrace”.

“I think people that are actually prepared to consider policy options, whether they be a backbencher, whether they be a minister or anybody else, when they start to denigrate their colleagues in that way it is an absolute disgrace,” Mr Broadbent went on to say.

Whatever the reason behind the backbench perturbations, PM Turnbull also appears to be getting cold feet over the GST.  Treasurer Morrison may have started the week arguing he could convince Australians that GST reform was the right thing to do, but during question time this week he had to repeatedly deny any decision had been made to increase the tax.

And by week’s end the PM seemed to be hosing down one of the main reasons for the tax increase, namely to fund the states’ health and education services.Mr Turnbull claimed the states had developed a habit of thinking the federal government was an ATM, and that instead they had to raise their own taxes to pay for schools and hospitals.

But hairy chest on asylum seekers

Aside from the GST, the other big political issue of the week was the High Court’s decision to uphold Australia’s use of offshore detention to deter boat-borne asylum seekers.

Mr Turnbull used the decision to demonstrate he was no less tough on asylum seekers than his predecessor.

In Parliament, the Greens’ Adam Bandt argued this was the PM’s “first big moral test” to show that “child abuse is somehow necessary to stop people dying at sea”, and that he should promise to stop the deportation back to Nauru of families affected by the High Court decision.

In response, Mr Turnbull noted the Greens do not have a monopoly on empathy or morality, that even one child in detention was one child too many, but that “if the government were to follow the policies advocated by the Greens party in this regard, the consequence would not simply be tens of thousands of unauthorised arrivals coming to Australia, it would be thousands of deaths at sea.”

The PM then called on Mr Bandt to “recognise his responsibility to support our collective effort at a policy that has broad support across the community, keeping our borders secure and keeping women and children safe on the seas, ensuring they don’t get on leaky boats and that they don’t drown at sea.”

Nevertheless, Immigration Minister Peter Dutton has remained coy on the precise timing of any plans to return the families in question to Nauru, saying only that “we are not going to put children into harm’s way,” and “we are going to work individually through each of the cases.”

Lest anyone be tempted to think the minister is turning into a big softie, a mysteriously leaked cabinet paper suggests he is considering a revamped humanitarian resettlement program with tougher screening processes, a strengthened citizenship test, and a system for ongoing monitoring of some refugees even after they become Australian citizens.

The minister denied knowledge of the paper but not would not apologise for its seemingly draconian measures.

Meantime, Border Force officials inconveniently told a Senate committee at the end of this week that the boats haven’t quite been stopped. Twenty-three vessels have been turned around since Operation Sovereign Borders commenced after the election of the Abbott Government.

The commander of the operation, Maj Gen Andrew Bottrell also noted “there remains a persistent number of attempts, all of which have failed over the last year and a half”.