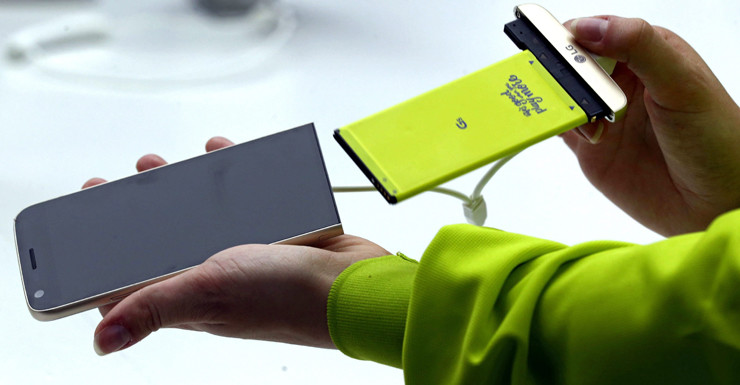 The G5: dawn of a new kind of smartphone

LG’s newest offering is the best thing to happen to smartphones since Apple.

As the world marvelled this week at the new Samsung Galaxy S7, its smaller rival LG quietly announced what could be the biggest innovation in smartphone technology this year.

On Monday, LG revealed the G5 at the Mobile World Congress in Barcelona, the same day as Samsung’s launch event for the Galaxy. It was easy to miss the G5’s significance.

But there’s one very important difference: the base of the phone can be removed to swap the battery and upgrade features of the device.

Ladies and gentlemen, you are now witnessing the next evolution in smartphones.

While the removable battery is a first for an all-metal smartphone, the swappable base module is the true boon here, giving users the option to upgrade either the camera or the audio player (not both, sorry).

The CAM Plus module is a little bulky, adding depth to the handset’s 7.7-millimetre depth. By comparison, the Apple iPhone 6s comes in at 7.3 millimetres deep and the Samsung Galaxy S6 at 6.8 millimetres. But for anyone who has ever cursed the software controls many operating systems use for photography, it’s a small price to pay.

The unit features a physical shutter button and zoom wheel, a dedicated video button, an LED light and a separate power button. As a bonus, this module also packs an extra battery in the grip, increasing the overall power to 4000 mAh (the standard battery is 2800 mAh).

If your tastes in photography lay firmly in smartphone territory, the CAM Plus is the ideal upgrade to take advantage of the G5’s 16-megapixel camera.

For audiophiles looking for a high-end audio player in a smartphone, the LG HiFi Plus module is the answer.

The result of a partnership with major audio manufacturer, Bang &Olufsen, the audio module is a DAC amplifier that produces 32-bit audio at 384 kHz and reduces noise. In layman’s terms, it makes your music sound WAY better, even streaming audio services like Spotify and TIDAL.

But remember, the original audio source needs to be of decent quality in order to benefit from the capabilities of the HiFi Plus. You can’t make a silk purse of a sow’s ear.

Beyond these two feature upgrades, the phone packs an 8-megapixel front camera, 4GB of RAM, 32GB of internal storage along with a microSD expansion port (up to 2TB), and a Qualcomm Snapdragon 820 processor – offering improved performance, download speeds and battery life.

You’ll also find what will soon be commonplace across many smartphones: the USB-C port – it’s so hot right now.

A smartphone, but not as we know it

Modularity is not a new idea, but LG has found a way to solve a major hurdle to its widespread adoption.

In late 2013 Hakkens began collaborating with Motorola on a similar project for Google, called Project Ara. The idea is essentially the same: to create a cheap smartphone with modules from Google and third-party suppliers that users can upgrade at will. Google is expected to release the first Project Ara handset this year.

One of the biggest obstacles has been the technicality of integrating separate modules without encountering issues of slow speed, and the size of the physical shell, or frame, required to achieve this.

LG has clearly found a way to overcome the issue of connecting the camera and audio player modules to the smartphone body without sacrificing speed and performance. However, chances are these may be the only two the manufacturer deems itself capable of successfully releasing onto the market.

The idea of swappable modules may not be a new one, and the G5 is not fully modular. But this is a brave move by LG that signals the beginning of something different in the smartphone market.