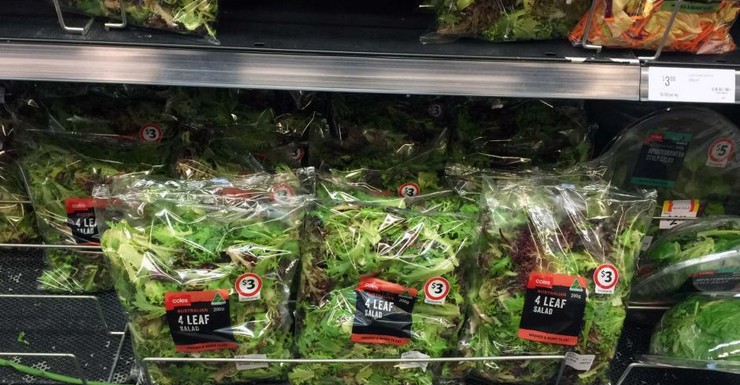 A national recall of pre-packed lettuce sold at supermarkets has been issued following a spike in salmonella cases among Victorian adults.

Health experts are on the lookout for more incidents of salmonella poisoning following a spate of cases in Victoria and a national recall on some lettuce products.

A national voluntary recall was issued for prepackaged lettuce from the Victorian-based Tripod Farmers company, after a higher-than-usual number of salmonella cases were reported in the state.

The recall was issued after Victoria’s Department of Health said there had been 28 salmonella cases so far this year, and the lettuce was the common source.

The company has withdrawn 24 products from supermarket shelves and is investigating the salmonella source.

A recall notice on Food Standards Australia’s website listed outlets in all states and territories, excluding Tasmania and Western Australia.

Coles said any of their salad mixes with a use-by date on or after February 12, 2016 were safe to consume.

Woolworths said any of their salad products with use-by dates on or before February 14 should not be consumed – this applies to Woolworths stores in NSW, VIC and ACT only.

Department of Health and Human Services senior medical adviser Dr Finn Romanes said people should either return them to the place of purchase or throw them out.

He said the outbreak could have been caused by the fertiliser used to grow the lettuce.

“It’s linked back to chickens and eggs, so it could be for example that there’s a link to fertiliser sourced by chickens for example, but we don’t have exact data in this case.”

The department said an inspection of Tripod Farmers had been carried out and a “thorough clean” had taken place.

Dr Romanes said it was still unclear exactly how many products were involved.

“We know that the lettuce products involved, that there are a number of products, and that the distribution of those products is very widespread, particularly in Victoria,” he said.

He said two people had been hospitalised but no one had died from the salmonella outbreak.

He said he expected more cases to emerge over the next few days.

“When we identify an outbreak of salmonella, usually the people, or the cases that we’re aware of are the tip of an iceberg,” Dr Romanes said.

“So what we expect to happen over the next few days is there probably will be more cases that do come in as people present their symptoms and attend a doctor for a test.

“We have good systems in place in Victoria and in other states.”

Dr Romanes said the link between the salads and the illness came after an unusually high number of reported cases of salmonella infection.

“Normally we only see a handful of cases of this strain each year, but so far this year there have been 28 adult cases of salmonella anatum – mostly adults – notified to the department,” he said.

He said all of the 28 cases reported had the same strain of salmonella anatum.

Tests of three products from two batches of Tripod Farmers lettuce also tested positive for the strain of salmonella, he said.

He said the strain was relatively uncommon.

“There’s usually only a handful of cases detected in Victoria each year … so it was very unusual to have as many as 28 cases of this strain notified to the department at the start of this year,” he said.